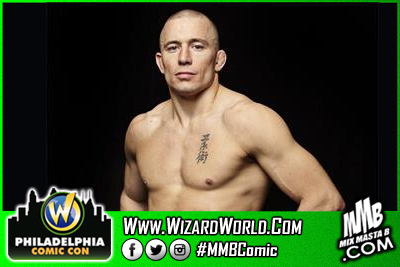 One of the most popular mixed martial arts fighters in the world, Georges St-Pierre will attend Wizard World Philadelphia on Sunday, June 5, at the Pennsylvania Convention Center, it was announced today by the Quebec native and Wizard World, Inc. (OTCBB: WIZD). The three-time former UFC Welterweight champion, known by many as the best “pound-for-pound” MMA athlete ever, will greet fans, sign autographs and pose for photo ops at his first Wizard World comic con appearance.


Already a 2nd dan Kyokushin karate black belt at 12, Georges dedicated himself to martial arts and training throughout his teen years. After seeing jiu-jitsu legend Royce Gracie fight in 1993 at UFC 1, “Rush” knew exactly what he wanted to do with his life and how he was going to reach those goals: he invested all his energy and all his time at becoming a better version of himself. When he wasn’t training or at school, Georges worked as a doorman in nightclubs, or hung off the back of a garbage truck, hauling in refuse. He discovered a simple truth: never stopping helps reach goals.

He grew as a person and as a fighter, adding fighting disciplines such as boxing, wrestling, and Brazilian Jiu Jitsu to his karate background and competed in his first amateur bout at age 16. He won that match, and continued his steady improvement. In 2006 he became the UFC Welterweight Champion. He lost the title in 2007 but subsequently regained it in front of his hometown fans of Montreal in 2008 and hasn’t lost a single title defense since then.

Along his career, St-Pierre, 34, accomplished numerous firsts and awards including: the all-time most consecutive welterweight title defenses, three-time consecutive Canadian Athlete of the Year Awards (’08– ’10) by Rogers Sportsnet, Fighter of the Year Awards (’09) by Sports Illustrated , World MMA Awards, MMAPayout, Inside MMA and MMAJunkie, the “Most Dangerous Man of the Year” by the Spike Guys Choice Awards (’10) and the MMA Fighter of the Year Award (’08) by Black Belt Magazine.
St-Pierre is the author of the New York Times bestseller The Way of the Fight. Released in 2013, the book shares the lessons he’s learned on the way to the top. Later that year, St-Pierre officially announced that he had decided to vacate the title and take some time off from MMA, taking a role in the 2014 blockbuster Captain America: Winter Soldier. He has not ruled out a return to the ring in the future. GSP is based in Montreal.

St-Pierre, who appeared in  joins an amazing lineup of superstar entertainers scheduled to attend the pop culture extravaganza, including “Marvel” movie standouts Chris Evans, Chris Hemsworth andTom Hiddleston, David Duchovny ("The X-Files"), the Back to the Future trio of Michael J. Fox, Christopher Lloyd and Lea Thompson and "The Walking Dead" standout Norman Reedus , with many other headliners.

For more on the 2016 Wizard World Philadelphia, visit http://wizd.me/PhiladelphiaPR .
Posted by Mix Masta B at Wednesday, March 23, 2016