Intercontinental Champion Kevin Owens vs. Sami Zayn vs. Dolph Ziggler vs. Zack Ryder vs. Sin Cara vs. The Miz vs. Stardust #MMBMania 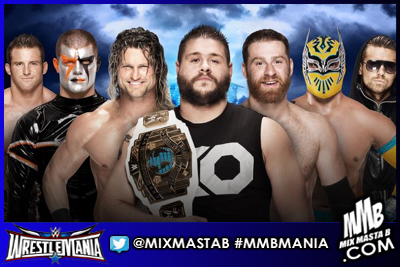 Intercontinental Champion Kevin Owens may have thought that there was no one deserving enough to challenge him at “KO-Mania,” but he didn’t have a say in the matter, as he must now defend his title against six Superstars in a Ladder Match on The Grandest Stage of Them All.
The Prizefighter has been bragging for weeks about the lack of worthy competition as WrestleMania approaches. All the while, Owens was drawing the ire of Dolph Ziggler, The Miz andSami Zayn, who returned to Raw searching for retribution against his longtime friend-turned-enemy. All three had gripes with Owens and were on the hunt for his championship. As the three argued with each other on the March 21 edition of Raw, the cunning Owens began hatching a plan that he believed would help him keep the Intercontinental Title beyond WrestleMania.


Owens promised Zayn, Ziggler and Miz that he would talk to The Authority about making a Triple Threat Match to determine his Show of Shows opponent. Owens did just that, convincing a distracted Stephanie McMahon to allow him to set the match up. Later that night, however, Owens revealed his scheme to the WWE Universe when he introduced the three participants in the battle:Zack Ryder, Sin Cara and Stardust. The Prizefighter was pleased with himself as he joined the baffled Raw announce team. Zayn, The Showoff and The Awesome One, each furious with Owens, made their way to ringside to confront the champion as Sin Cara, Ryder and Stardust battled inside the squared circle for what seemed to be a huge opportunity.
Things quickly turned chaotic as Ziggler, Miz and Zayn attacked Owens. The melee then spilled into the ring and engulfed Long Island Iced-Z, the Lucha Dragon and The Prince of Dark Matter, bringing their title hopes to a crashing halt. However, the six of them soon united against a common enemy, Owens, and sent the Intercontinental Champion reeling from the ring.
Owens’ plan soon disintegrated as he retreated to The Authority’s office, where Stephanie was trying to deal with the looming threat of Roman Reigns. The Prizefighter still claimed there was no one worthy of challenging him at WrestleMania, but was quickly rebuffed by Stephanie, who declared that Owens would now defend his title against all six men at The Show of Shows. When Owens seemed to protest, she took things one step further, making the battle a Ladder Match.
Kevin Owens has demanded that the spotlight be on him on The Grandest Stage of Them All. He’ll have just that at WrestleMania. Will he be able to retrieve his title, or will one of his six challengers scale to new heights and etch a WrestleMania moment? Find out Sunday, April 3, at 7 p.m. ET/4 p.m. PT, live on WWE Network!