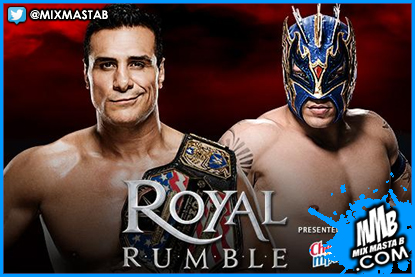 Kalisto has stunned United States Champion Alberto Del Rio twice before — including once to win the stars-and-stripes title. Can The King of Flight accomplish that feat again at Royal Rumble when he meets Del Rio in another title match?


Start your WWE Network free trial to watch Royal Rumble
In recent weeks, Kalisto has revealed himself to be not only a courageous warrior, but also a persistent threat to The League of Nations’ representative. Del Rio’s cockiness got the better of him during an initial non-title match, during which Kalisto also had the added support of John Cena at ringside, paving the way for Kalisto to score the upset win and earn a title rematch.
The rematch occurred on the Jan. 11 edition of Raw, and Del Rio, incensed, tore into Kalisto, battering the masked youngster without remorse. Yet, with only the slightest opening available to him, The Lucha Dragon rebounded in thrilling fashion to claim his first title in WWE. The glory ended up being short-lived, however, as Del Rio regained the title in a match seen days later on SmackDown.
How Kalisto became WWE's next great luchador | Photos: Kalisto unmasked
With a championship rubber match on the horizon this Sunday at Royal Rumble, who will leave Orlando, Fla., with the prestigious United States Title? Will Del Rio stomp his way to victory or will The King of Flight’s aerial attack pay off? Watch the U.S. Title conflict in its entirety when Royal Rumble airs live on WWE Network this Sunday at 8 ET/5 PT.
Posted by Mix Masta B at Monday, January 18, 2016