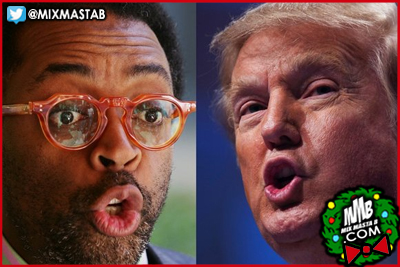 Director Spike Lee has never been one to pull punches — be it in his controversial films, stirring documentaries or candid interviews.
In a new interview with The Daily Beast to discuss his new drama "Chi-Rac" which tackles the topic of gun violence in Chicago, Lee had particularly harsh words for Presidential hopeful and Republican frontrunner Donald Trump.
"[He] wants to close down mosques now," the director told interviewer Marlow Stern. "That's like the Nazis. That's like Hitler, Mussolini, the Axis Powers. You can't do that!"
The director, best known for his explorations of American race relations in such as "Do the Right Thing" and "Malcolm X," took specific issue with Trump's claim that he saw "thousands of Muslims" cheering after the towers fell on 9/11.

"That was a bold-faced lie,"Lee said, before adding: "Here's the thing: the United States has perfected the science of 'the boogeyman.' Native-Americans, African-Americans, Hispanics, Nazis, Soviets, Chinese, and now it's the Muslims. They're the new boogeymen."
Lee went on to stress that homegrown terrorists a la Timothy McVeigh are predominantly white males. "If you blow up a federal building, is that a terrorist act? Would Donald Trump label Timothy McVeigh a terrorist? I don't think so."
To read the full interview, which also touches on Lee's new film (opening Friday) and his enduring admiration for basketball legend Michael Jordan, click here.