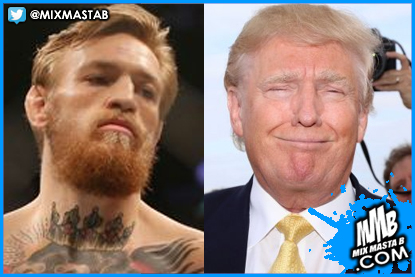 
Following her defeat at UFC 193, Trump tweeted that he was glad to see Ronda Rousey lose her Bantamweight title, because she's "not a nice person." While other fight fans – like Lady Gaga – uttered similar sentiments, they were mostly upset that Rousey refused to touch gloves with Holly Holm before the fight. In Trump's case, we suspect it had more to do with that time she told CNN "I wouldn't vote for him…I don't want a reality star running my country."

Regardless of his motivations, Trump's take has angered one of Rousey's UFC compatriots, Conor McGregor, and when TMZ cameras caught up with him at LAX, he let it be known that the GOP candidate should probably shut his mouth ASAP.

"It's easy for someone that's not in there to comment, but it's different when you're in there. The emotions are high," McGregor said. "It is what it is. You either want to touch gloves or you don't. That means nothing, so Donald can shut his big, fat mouth. I don't give a fuck about Donald Trump."

You hear that? That's the sound of McGregor's work visa  evaporating into thin air. Assuming, you know, that Trump does become president. Hell, who are we kidding? McGregor probably wouldn't set on U.S. soil ever again if that happened.