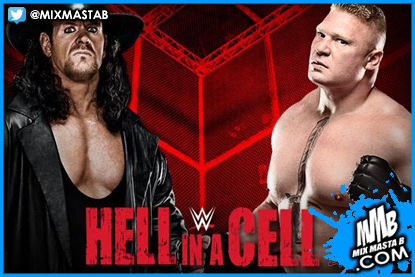 The monumental rivalry between The Undertaker and Brock Lesnar will be settled under the bright lights of Los Angeles’ STAPLES Center on Oct. 25 when The Phenom and The Beast Incarnate meet inside the only structure that can contain the brutality: Hell in a Cell!


Watch WWE Hell in a Cell live on WWE Network
The two proud warriors have split their last two encounters. Lesnar famously snapped The Undertaker’s 21-year WrestleMania undefeated streak in 2014, setting off a goal of redemption for The Deadman. In a career first for The Undertaker, he defeated Lesnar when they met again this past August at SummerSlam, though the win was not without controversy.
In the late moments of the match, The Anomaly made The Undertaker tap out to the Kimura Lock, prompting the timekeeper to ring the bell and Lesnar to think he won. The referee, however, did not see the tap, and commanded the match to continue, giving The Phenom an opportunity to deliver a low blow and apply the Hell’s Gate, causing Lesnar to pass out.
Relive SummerSlam on demand | See photos from their SummerSlam showdown
Though the record books consider The Undertaker — one of the most decorated Superstars in WWE history — the official victor, Lesnar’s advocate, Paul Heyman argues The Beast Incarnate was cheated out of his rightful win.
Oct. 25 will not be the first time The Undertaker and Lesnar have dueled inside the dreaded Hell in a Cell. In October 2002, then-WWE World Heavyweight Champion Lesnar overcame The Undertaker in a fiery battle inside the dangerous warzone.
With an incensed Lesnar bent on destroying The Phenom, will the result be the same at this year’s WWE Hell in a Cell? Or will The Undertaker erase the controversy of SummerSlam with a resounding win against the only athlete in history to have held the WWE World Heavyweight, UFC Heavyweight and NCAA national heavyweight championships?
Watch the historic conclusion to the “Brock Lesnar Go to Hell” tour when The Undertaker and Brock Lesnar tie up inside Hell in a Cell, live Sunday, Oct. 25, only on the award-winning WWE Network.
Posted by Mix Masta B at Sunday, September 20, 2015