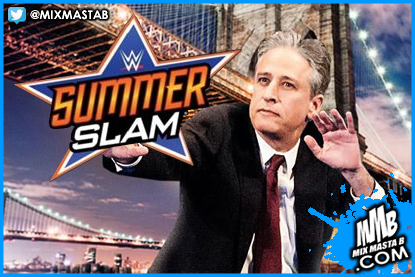 After 16 epic years as host of “The Daily Show with Jon Stewart,” Jon Stewart has announced his retirement plans. What will Stewart do next? A trip to Disney? A run for President? A one-way trip to Mars? No, as first reported by USAToday.com, Stewart is set to host SummerSlam, this Sunday, Aug. 23, at 7 p.m. ET/4 p.m. PT live on WWE Network.


Stewart, a longtime member of the WWE Universe, appeared earlier this year in an ongoing rivalry with now-WWE World Heavyweight Champion Seth Rollins. After Stewart taunted Rollins on social media, Rollins appeared on “The Daily Show with Jon Stewart,” where he challenged Stewart to appear on Monday Night Raw to settle their score.
Most recently, Rollins appeared in a look-back segment during Stewart’s final few days on “The Daily Show.”
Stewart stepped down from his post as host of “The Daily Show with Jon Stewart” on Thursday, Aug. 6. During his tenure, Stewart welcomed a wide array of high-profile guests, including President Barack Obama, former President Jimmy Carter, Clint Eastwood, Halle Berry, Ben Affleck, Jon Bon Jovi, Bruce Springsteen, Derek Jeter, Shaquille O’Neal, Bill Gates and many more.
This year, SummerSlam has been extended to a four-hour broadcast plus a one-hour pre-show beginning at 6 p.m. ET on WWE Network. Emanating live from a sold-out Barclays Center in Brooklyn, N.Y., SummerSlam will feature The Undertaker against Brock Lesnar in a rematch of their historic WrestleMania clash where The Beast Incarnate ended The Phenom’s undefeated streak.
Posted by Mix Masta B at Monday, August 17, 2015