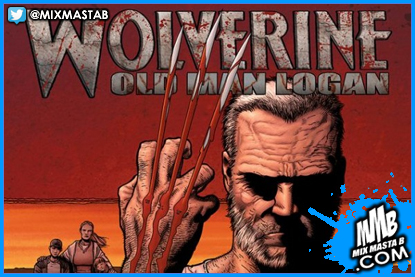 2016 is going to be a massive year for 20th Century Fox’s Marvel movies, bringing the release of X-Men: Apocalypse – the conclusion of the trilogy that began in X-Men: First Class – and the long awaited debut of Gambit and Deadpool spinoff movies. However, to some fans 2017 will be an equally important year for Fox’s Marvel properties because it will apparently mark the end of Hugh Jackman’s time as Wolverine.

It was previously unclear what Jackman’s final Wolverine movie would be called, but thanks to Fox’s Hall H presentation at San Diego Comic-Con 2015, it has been revealed the movie will simply be titled Wolverine. As for the movie’s story, Hugh Jackman teased which popular comic might influence his final outing as Wolverine: Old Man Logan.

Speaking to a massive crowd in Hall H, Jackman said, “I’ve got three words for you guys: Old Man Logan.” The actor then added, “Take from that what you will.” These comments followed a screening of Jackman’s very first X-Men audition tape from sixteen years ago, which caused the actor to lament just how much he’d aged since then. It’s unclear whether the reference to Old Man Logan was merely a comment on his own age, or whether he was hinting at a potential storyline for Wolverine.
Jackman also told fans that Wolverine will definitely be his last time playing the popular X-Men character:

“As I promised, this next time is my last time putting on the claws, it’s one last time.”

The first Old Man Logan story arc took was written by Mark Millar and illustrated by Steve McNiven. After being tricked into slaughtering the X-Men, Wolverine refuses to pop his claws ever again. With him out of the picture and the X-Men killed, villains began to take over and kill many of the iconic Marvel heroes in the process.


Old Man Logan starts with Wolverine as a family man living in a tragic landscape that is ruled by bad guys like Kingpin, Red Skull, and several others. When Wolverine is short on money, his landlords – Hulk and She-Hulk’s very violent and twisted grandchildren – make it clear Logan needs to pay up or there will be big trouble for him and his loved ones. In order to get some much-needed money, Wolverine accepts a delivery job that will have him travel across this villain-run version of the United States with a now blind Hawkeye. As expected, the duo encounter a whole lot of trouble along the way.
While a movie inspired by Old Man Logan is something many fans would love to see, it’s important to remember Fox doesn’t have the rights to many of the characters involved in the comic story. For example, the studio cannot have Wolverine join forces with Hawkeye (since he’s owned by Marvel Studios), a dinosaur covered in the Venom symbiote, or even something smaller like Wolverine riding around in a Spider-Buggy. Fox certainly can’t show that big heroes like Thor and Captain America have been killed (both are owned by Marvel), but with the rights to the X-Men in hand there are still a lot of characters to work with.
If the storyline does influence Wolverine, it will have to undergo several changes; something which is common for many comic book movies anyway. After all, The Wolverine was influenced by Chris Claremont and Frank Miller’s classic Wolverine limited series, yet that movie made several noticeable changes from the source material. Only time will tell how much Wolverine is influenced by Millar and McNiven’s comic – if at all – but for now, it’s certainly fun to think about. If this is indeed Jackman’s final movie as Wolverine, then an adventure inspired by Old Man Logan would be a fitting way to conclude his story.
Fox’s Hall H panel also presented a Deadpool trailer, a final trailer for Fantastic Four, and a X-Men: Apocalypse teaser trailer.
Fantastic Four opens on August 7, 2015; Deadpool on February 12, 2016; X-Men: Apocalypse on May 27, 2016; Gambit on October 7, 2016; Wolverine on March 3, 2017; Fantastic Four 2 on June 9, 2017; and some as-yet unspecified X-Men film on July 13, 2018.