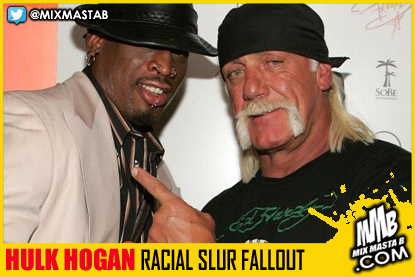 The Worm has The Hulkster’s back.
NBA Hall of Famer Dennis Rodman, who has courted controversy over his friendship with North Korean strongman Kim Jong Un, says Hulk Hogan is no racist.
Rodman came to Hogan’s defense after the WWE terminated its contract with the wrestling legend following the release of a leaked court document showing he used the N-word on a sex tape.


“I’ve known @HulkHogan for 25 years,” Rodman tweeted, according to the Daily News . “... There isn’t a racist bone in that mans body.”
“Lets lend our support to the Hulkster @HulkHogan who most certainly is not a racist,” Rodman tweeted at Scottie Pippen, Magic Johnson, Shaquille O’Neal and Mike Tyson.
Rodman and Hogan appeared together in a 1997 WCW tag team event that also featured ex-NBA star Karl Malone and Diamond Dallas Page. The News said Hogan had Rodman on his 2008 reality show “Hulk Hogan’s Celebrity Championship Wrestling” as a contestant.
Rodman has been criticized for several trips he has made to North Korea and for calling its dictator a friend. “Guess what. I love him,” Rodman said of Kim.
The WWE canned Hogan Friday.
“WWE is committed to embracing and celebrating individuals from all backgrounds as demonstrated by the diversity of our employees, performers and fans worldwide ,” WWE said in a statement.
Hogan has been accused of using the N-word to describe a man involved with his daughter, Brooke, in a leaked transcript of a sex tape that is the center of a multimillion dollar lawsuit with the gossip site Gawker.
CREDIT / SOURCE - FOX NEWS