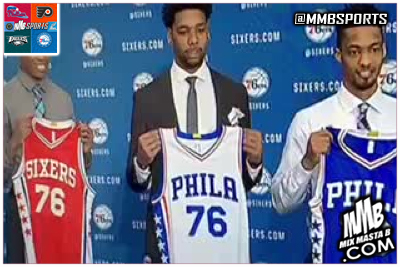 Is Jahlil Okafor salty about being drafted by the 76ers?

The former Duke star was predicted by most to go either No. 1 or No. 2 in the 2015 NBA Draft. But when the Lakers selected D'Angelo Russell second, Okafor slipped down to the Sixers at No. 3.

On Saturday, he was introduced in his new city and presented with a uniform to hold up for pictures. When he was done meeting with the press, he dispassionately tossed the jersey onto a table or chair and walked away. Naturally, the Internet freaked out and began questioning whether Okafor was displeased with his situation.

It makes it look a little worse since the other two draftees, Richaun Holmes and J.P. Tokoto, were both selected in the second round and might be holding on to those jerseys a bit tighter. But I get it, you think you're about to move out to Los Angeles and start hanging out with Hollywood stars and eating breakfast with Kobe. Instead, you end up in Philadelphia. Not quite the same.
Regardless, I'm pretty sure any 19-year-old is just happy to be given a shot in the NBA.
So to answer the question. No, Okafor probably isn't salty about getting drafted by the Sixers. I'm sure he wasn't even thinking about how the Internet would perceive his actions. But, at the same time, it wouldn't hurt to be a little more tender with the new merchandise.