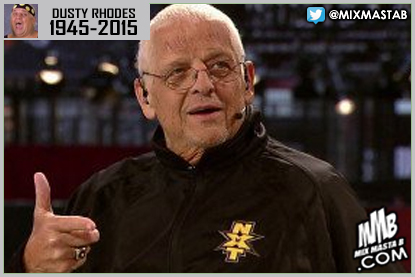 WWE announced this afternoon that Virgil Runnels, aka “The American Dream” Dusty Rhodes, passed away today at the age of 69. Details have begun to surface regarding the cause of his death.
TMZ reports that Rhodes fell in his home in Orlando, Florida on Wednesday morning and he was transported to a nearby hospital.


“Officials tell us … emergency personnel responded to Dusty’s home in Orlando, FL at 5:56 AM Wednesday morning after getting a call reporting a 69-year-old male had taken a fall.”

Rhodes suffered “numerous complications” due to the fall, which ultimately proved fatal.
Wrestling Observer editor Dave Meltzer also reported on Rhodes having a fall, adding that his kidneys shut down and he became dehydrated.
Posted by Mix Masta B at Sunday, June 14, 2015