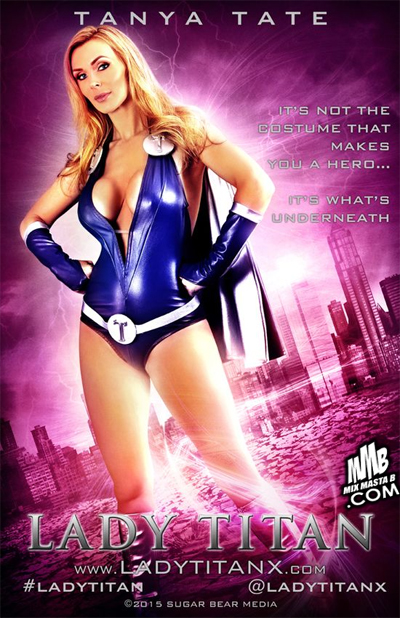 (HOLLYWOOD, CA) Adult entertainment superstar Tanya Tate ( http://tanyatate.com) is ready for a wild weekend at the upcoming EXXXOTICA Chicago event. The director / star has become a fan favourite at the EXXXOTICA events and is looking forward to meeting the fans that make it out to the show. Adding an extra incentive to attend, porn’s cosplay queen will not only dress the part of a superhero, but will also debut a new poster. Created in the style of theatrical superhero movie posters like The Avengers and Batman v Superman,Tanya has designed a print that features her suited up in her Lady Titan costume, ready for battle. The EXXXOTICA show will be the first time Tanya will be signing the poster at an event.
“I love doing the EXXXOTICA shows,” said Tanya Tate. “They are always loads of fun. I get to meet all the fans, participate in panels. It’s a real interactive experience. I really look forward to heading to Chicago.”
EXXXOTICA Chicago is set to take place at the Donald E. Stephens Convention Center located at 9291 Bryn Mawr Ave. in Rosemont. More information on Tanya’s EXXXOTICA appearance can be found via the promotional video she made, seen here:  http://bit.ly/TTXchi15.
While at the event Tanya will be hosting a seminar titled “Across The Pond: US Porn With British Sensation Tanya Tate.” As a multi-award winning UK pornstar who has found equalled success in the US, Tanya is familiar with their similarities and differences. From the talent pool to the productions to the fans, the director / star will go in depth and what sets the two worlds apart. More info on Tanya’s seminar can be found on the EXXXOTICA website here: http://bit.ly/TTATPXChi.
Those unable to make Tanya’s EXXXOTICA Chicago appearance can still get their hands on some of her signed collectibles. Tanya’s online store is packed with posters, 8x10s and more featuring the sexy superstar. Ever want to have a mini-version of Tanya Tate with you? Pick up an action figure based on the star. All can be found in her store: http://bit.ly/TanyaTateSE.
Meet Tanya Tate at EXXXOTICA Chicago! Pick up a signed print of her all new poster then be sure to stop by her seminar.
For more  Tanya Tate please visit the  Tanya Tate network:
www.TanyaTate.com
www.JustaLottaTanya.com
www.TanyaTateStore.com
www.Twitter.com/TanyaTate
www.ItsMyUrls.com/TanyaTate
Tanya Tate is self represented and can be booked directly:
www.BookTanya.com
Posted by Mix Masta B at Thursday, June 04, 2015