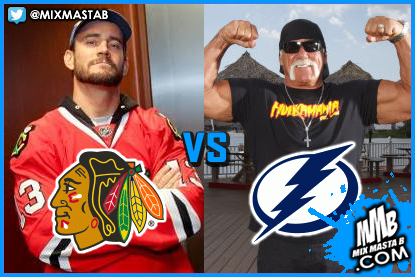 As many of you know CM Punk is Chicago all the way, diehard Cubs fan, but even more a Blackhawks fan. Hulk Hogan resides in Tampa and is a Lightning fan. The two teams are currently facing off in the NHL Stanley Cup Final.

Hulkster decided to take to twitter to tell CM Punk what he thought of the Blackhawks and well click READ MORE to see the exchange between the two. It's become a good ol' fashion hockey brawl on twitter.

Like I said the Blackhawks are in a whole lot of trouble,they should take their puck"punk" and go home,CM can show them the way brother HH
— Hulk Hogan (@HulkHogan) June 9, 2015

You mispronounced the team captains name and didn't even know the coaches name. You're a hack.Shut the fuck up or I'll wreck you @HulkHogan
— Coach (@CMPunk) June 9, 2015