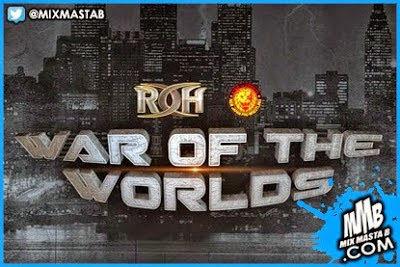 It looked like Jay Diesel was set to face Moose in the dark opener, but Veda Scott came out and said that he won’t be coming out until he gets what he deserves, which is an ROH Title match. So instead, we got The Romantic Touch.


1. Adam Page (w/Colby Corino) beat Takaaki Watanabe. Watanabe has shown great strides in terms of charisma and ability to connect; this crowd dug him. Page is fine but he still hasn’t had a performance that has wowed the masses. He won with a Beach Break (back-to-belly piledriver). Post-match, Page continued to disrespect Watanabe before leaving the ring, so Watanabe reeled in Cody and laid him out with a lariat.
Once again, NJPW referee Red Shoes was out to an incredibly respectful response. He even got a streamer thrown for him, which he humorously appreciated.
2. Michael Elgin over Kushida. Elgin extended his hand for the Code of Honor, but Kushida just stuck a middle finger in his face to a big pop which sparked a loud “F**k you, Elgin” chant.” The match itself was pretty good. The action was solid and the crowd was into it, but it wasn’t anything particularly special. Elgin won with a spinning backfist and the Revolution Bomb.
3. Tetsuya Naito beat Kyle O’Reilly. Both guys had their supporters throughout the match and the action was very solid. Good match. Naito won after hitting the Stardust Press. Afterwards, the two hugged to a big pop before O’Reilly left the ring to Naito.
4. Shinsuke Nakamura defeated Jushin “Thunder” Liger, ROH TV Champion Jay Lethal, and Mark Briscoe in a non-title Four Corner Survival match. This was about what one would expect. It was fun and the crowd went gaga for Liger and especially Nakamura. Nakamura pinned Liger with the Boma Ye.
Intermission. So far the show has been solid, but it’s not quite as strong as last nights to this point. However, I took an unofficial poll during intermission and was out-voted 5 to 3 that tonight’s first half was stronger than last nights.
The second half opened with Cheeseburger coming out and throwing free merch into the crowd. He threw something which got caught in the lighting rig and drew a “You f—ed up” chant. Funny. Brutal Bob Evans entered the ring and attacked Cheeseburger before taking the merch for himself. Cheeseburger tried to fight back, but Evans beat him down. ROH officials separated the two before Cheeseburger grabbed a mic and said this wasn’t over, he’s coming for Brutal Bob.
Tiger Hattori was out for the next match and received a very nice response and a handful of streamers.
5. Hiroshi Tanahashi pinned Roderick Strong. Roddy got cut and was bleeding moderately from a pretty early point in the match. Roddy got all of his stuff in and between last night and tonight, has looked like a million bucks. Tanahashi over-delivered here and took way more punishment than anyone would’ve expected. Great match. What a week for Roddy. Tanahashi won with the High Fly Flow and both guys raised each other’s hand afterwards.
Once again, Red Shoes got the big pop and streamer treatment when he entered the ring. He even took one of the streamer rolls and put it in his pocket for safekeeping. Funny.
6. ROH Tag Champions The Addiction beat Kazuchika Okada and Gedo. This was fine but relatively unspectacular. The crowd was super into Okada and even Gedo. The Addiction pinned Gedo after a release belly-to-back into a gutbuster. Post-match, Daniels tried to attack Okada, but ate a dropkick and a Rainmaker for his efforts. The ring was left to Okada and Gedo to end their Philly run on a high note.
7. ROH Champion Jay Briscoe defeated Bobby Fish to retain the ROH Championship. The crowd was solidly behind Fish with chants of “new world champ.” Briscoe had some supporters, but he had far fewer than Fish and he also had a vocal segment of detractors. This one never went past a certain gear, but the action was pretty solid. The crowd really came to life after Fish kicked out of the first Jay Driller, but about a minute later Jay hit it a second time and scored the pin. They raised each other’s hand after the match to a good ovation. Moose came out with Veda Scott and Stokley Hathaway to have a brief stare-down with Jay. It looked like Moose had left and Jay returned to celebrating his win when Moose re-entered and laid Jay out with a spear. There was a sizable “Moose” chant, but half the crowd filled in “sucks” between chants. After Moose left, Jay took a mic and said the crowd thinks they’re cool (because they booed him all weekend), but he said he doesn’t give a damn and his two-year reign proves he’s the real deal.
8. Adam Cole, Mike Bennett, and Matt Taven (w/Maria Kanellis) beat AJ Styles, Matt Jackson, and Nick Jackson. Lots of fun schtick early with BC doing the “suck it” gimmick, Kingdom doing their thing, and even a Mount Rushmore tease between The Bucks and Cole, which spawned a loud “PWG” chant. This match was very wild, very creative, and completely action-packed as one would expect. There was a wild false finish with BC hitting Hollow Point into the Indytaker into the Styles Clash, but the ref got pulled out of the ring. Moments later, the BC did the same after Matt took a spike piledriver. The finish came when all three BC members superkicked Maria, only for Matt to turn into a belt shot leading to the Kingdom win. The show closed with the Bullet Club ‘too sweet’ing in the ring to the crowd’s delight.
CREDIT / SOURCE - 411Mania
Posted by Mix Masta B at Thursday, May 14, 2015

Email ThisBlogThis!Share to TwitterShare to FacebookShare to Pinterest
Labels: #MMBROH, NJPW, RING OF HONOR, ROH, War Of The Worlds