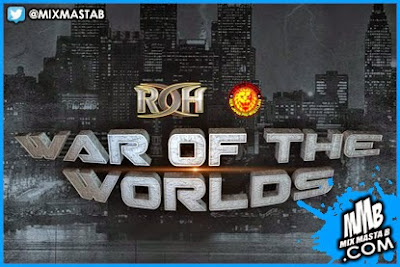 The two promotions ran their first of four joint shows tonight at the 2300 Arena in Philly. According to every report we’ve read so far, every match was either good or excellent, with AJ Styles vs. Adam Cole getting extremely high praise across the board.

Speaking of Adam Cole, he kicked off the show and teased that he was still injured and that doctors didn’t want him to compete, but ended up saying he’s back and was AJ Styles’ mystery opponent for tonight’s show. We’re not sure if this one is being put out on-demand or if they’re recording for television, or possibly both. With that in mind, *POTENTIAL SPOILERS* for the entire event are below.

(1) Gedo def. Delirious. Battle of the bookers!
(2) Roderick Strong def. Kushida.
Jay Lethal came out with Truth Martini and cut a promo on ROH World Champion Jay Briscoe, basically saying the TV title had more value than the world title at this point, and setting up for a match down the line.
(3) Jay Lethal def. Watanabe to retain the ROH TV Championship.

Email ThisBlogThis!Share to TwitterShare to FacebookShare to Pinterest
Labels: #MMBROH, NJPW, RING OF HONOR, ROH, War Of The Worlds