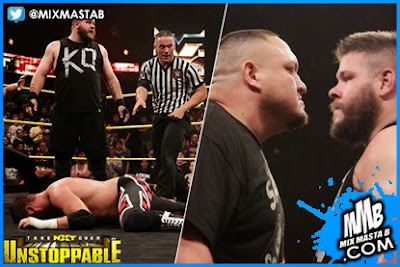 In a highly anticipated and very personal rematch, former best friends Sami Zayn and champion Kevin Owens went head-to-head for the NXT Title.
Early mind games by the champion quickly gave way to a true brawl that rampaged inside and outside the ring. into the NXT Universe. Back in the ring, like a man possessed, Zayn seemed to have an answer for almost everything Owens threw at him – that was until the action moved back outside and Owens suddenly the determined challenger with a Pop-up Powerbomb onto the ring apron. From there, the vicious titleholder would not relent, refusing to let officials check on Zayn — still recovering from an injury suffered weeks ago in a breakthrough clash on Monday Night Raw against John Cena — and then unleashed an absolute onslaught on his defenseless adversary.


Owens pulled the injured opponent back into to ring, where even multiple referees could not restrain the vile champion long enough to check out Zayn, causing NXT General Manager William Regal to physically interject. Regal grabbed a hold of the unyielding Owens, who responded by headbutting the GM before going for a chair. It looked as if the situation was going to get even worse for Zayn and virtually anyone in Owens' path.
Then, out of nowhere, Samoa Joe stepped into the NXT Universe! The tough-as-nails competitor climbed into the ring without hesitation and stood face-to-face with the brutal titleholder. Owens ultimately opted to back away from the confrontation, leaving the fired up NXT Universe to wonder what will happen next between these two fierce warriors.
CREDIT / SOURCE - MICHAEL BURDICK / WWE.COM
Posted by Mix Masta B at Thursday, May 21, 2015