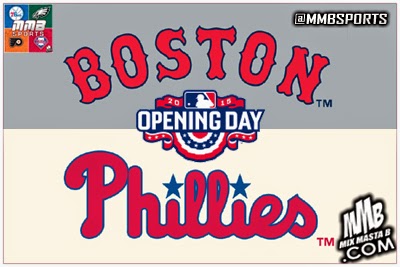 
PHILADELPHIA (AP) Cole Hamels will still be wearing red pinstripes and pitching for the Philadelphia Phillies against Pablo Sandoval, Hanley Ramirez and the Boston Red Sox on opening day.
Not the other way around.

The ace lefty has been on the trade block for a while and the Red Sox are considered potential front-runners to land Hamels. So from the moment the schedule was released, many speculated about the possibility Hamels would open 2015 against the Phillies.
"I had a pretty good idea I'd be in this ballpark," Hamels said with a smile.
For now, the three-time All-Star and 2008 World Series MVP remains on the rebuilding Phillies. By October, he could be pitching at Fenway Park.
"It is what it is," Hamels said about trade talk. "I don't get to control it as much as people actually think. It's not my decision. It's ultimately an organizational decision. I've been fortunate enough to be able to go out there and play baseball and do it for as long as I can, and that's all I can hope for. Whoever really wants me to pitch and go out and help the team win, that's all I can do."
Hamels will face a powerful offense that was reshaped by the free-agent additions of Sandoval and Ramirez. They joinDavid Ortiz, Dustin Pedroia and former Phillies star Shane Victorino.
The Red Sox are hoping to repeat a feat they accomplished just two years ago when they went from worst in the AL East to World Series champions. They fell to 71-91 last season, but are counting on their offense to provide plenty of pop.
"We're trying to do it all over again, go from worst to first," Pedroia said. "We have a good group of guys, we worked hard in spring training and we're ready to go."
Boston's pitching staff lacks the same star power. Clay Buchholz is the No. 1 guy until Hamels or someone else arrives in a trade. The righty will make his first opening-day start on Monday.
"I feel like I've done a lot of good work this offseason and just coming into camp and this spring. Still, there's going to be some adversity," Buchholz said. "But how you respond to that is another big factor in how the season goes."
Buchholz was 12-1 with a 1.74 ERA in 2013, but missed nearly three months with injuries. The Red Sox won three of his four starts in the postseason, but he posted a 4.35 ERA and didn't look the same. Buchholz struggled last year, going 8-11 with a 5.34 ERA.
Meanwhile, Hamels was 9-9 with a career-best 2.46 ERA in 2014.
The Red Sox failed to sign Jon Lester after trading him away last summer and haven't offered the Phillies the prospects they want for Hamels. They acquired Wade Miley, Rick Porcello and Justin Masterson to join Buchholz and Joe Kellyin the rotation.
"We want consistency and the guys we have will do that," Pedroia said. "It's going to be fun playing behind them."
---
Follow Rob Maaddi on Twitter: https://twitter.com/AP-RobMaaddi
Posted by Mix Masta B at Monday, April 06, 2015