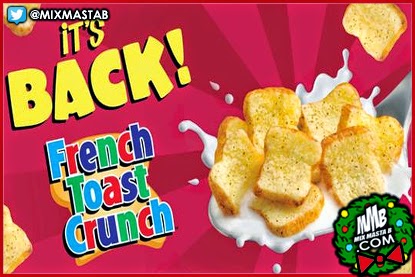 It’s back, by popular demand – literally.
The Minnesota-based food giant General Mills has announced it’s bringing back French Toast Crunch cereal, after hearing from customers who started a petition and created a Facebook group devoted to getting the cereal back on the market.


“We’ve seen a lot of cereals come and go over the years, but one of the most frequent requests we see is to bring back French Toast Crunch – the little toast-shaped, maple-flavored bites of deliciousness packed into a cereal box,” said the company’s announcement.
French Toast Crunch was only sold for about 10 years in the U.S., from 199-2006. Fans who remember it from their childhoods are ecstatic over the news. They took to Twitter using the hashtag #frenchtoastcrunchisback.


Even after 2006, the cereal remained in production in Canada, but it was a little pricey for U.S. customers to pay steep shipping costs to score a box of Canadian cereal.

Fans will no longer have to take such drastic measures. French Toast Crunch is available now at a few grocery stores and retailers, and will be distributed to stores nationwide by the end of January.
CREDIT / SOURCE - Melanie Sommer / BringMeTheNews.com
Posted by Mix Masta B at Monday, December 08, 2014