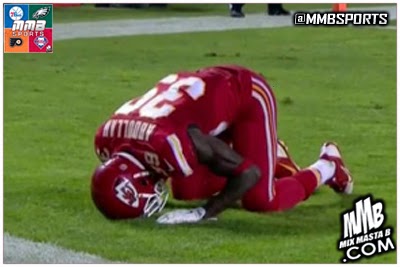 NFL officiating guru Mike Pereira once said he'd never throw a flag on a player who knelt in the end zone in prayer because he "didn't want to get struck by lightning."
That same belief wasn't shared by the crew working Monday night's Chiefs-Patriots game.


In a move that is sure to generate some discussion, Husain Abdullah of the Chiefs was flagged 15 yards after kneeling in the end zone in Muslim prayer after scoring a touchdown off an interception of Tom Brady. The unsportmanlike conduct penalty Abdullah received sparked a quick outrage on Twitter where it was noted that plenty of Christian players mark their scores with a sign of deference, reflection or tribute to their higher power.
Abdullah took the high road after the game and said he thought he was penalized for sliding into the prayer, though the head referee cited "falling to the ground on the knees" in announcing the infraction.
While some fans mistakenly said the NFL rulebook provides an exception for praying players, that isn't exactly true. The excessive celebration rule is actually kind of vague with players "prohibited from engaging in any celebrations while on the ground." Prayer is never specifically mentioned, though Pereira's comment generally embodies the permissive view that NFL officials usually take toward religious exhibition.

So what happened on Monday night? Perhaps the official who threw the flag on the Abdullah play was unfamiliar with Muslim custom. Perhaps it was something else.
Whatever the case, it's hard to imagine this story will pass without the NFL issuing comment or clarification. At this point, Abdullah and the NFL's Muslim fans certainly deserve one.
It's hard to imagine, however, that Abdullah will have to pay further for his prayer.
The NFL said on Tuesday that Abdullah should not have been penalized.

"Rule 12, Section 3, Article 1 (d) states 'players are prohibited from engaging in any celebrations or demonstrations while on the ground.' However, the officiating mechanic in this situation is not to flag a player who goes to the ground as part of religious expression, and as a result, there should have been no penalty on the play."