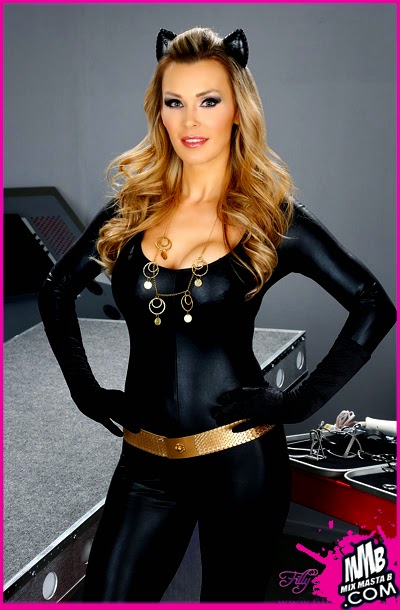 (HOLLYWOOD, CA) International adult superstar Tanya Tate (http://tanyatate.com/) is showcased in UK’s Love It! magazine (http://www.loveitmagazine.co.uk/) for her love of sexy cosplay. In an article titled ‘Holy Fantasies Batman!’, the director/star of Cosplay Queens and Tied Up Teens (Filly Films) talks about the sexier side of costume play. Noted as the “Queen of the cosplay scene,” Tanya is shown in her body hugging catsuit, a homage to one of her favourite super villains, Catwoman.
“Cosplay is incredibly sexy,” said Tanya. “Superheroes in general are sexy. Men and women in skin tight costumes, that is very hot. Love It! is extremely popular in England and to be featured in it, for my geeky hobby, is very cool.”
Love It! magazine is available currently in the UK and at international newsstands. Signed DVDs of Tanya Tate’s Cosplay Queens and Tied Up Teens are available from Tanya’s online store: TanyaTateStore.com. Tanya’s cosplay blog JustaLottaTanya.com features Tanya’s cosplay efforts and her upcoming appearances.
Tanya’s cosplay hobby is not the only reason the award winning adult actress has been featured in the mainstream press over the last few weeks. Online giant Amazon was called out for its shut down of adult performer’s wishlists. Prolific star Tanya was one of the performers who found themselves with a deleted account. After a "a routine review of accounts" it was closed for "inappropriate purposes or with inappropriate content."
“They continued to be vague as to the specific reason they deleted my account,” said Tanya. “Until they realised I was not going to back down one of the ‘specialists’ came up with the flimsiest of reasons; that I was ‘bartering’.” When Tanya would receive a gift from one of her fans, she showed her appreciation by taking a picture with the gift and emailing to the fan or reviewing the product on her JustaLottaTanya.com site. Amazon cited that as a good enough reason to close her account. “Their actions are quite shameful,” said Tanya. “Amazon representatives are well aware of who I am and even complemented me on my cosplaying. For adult stars, gaining popularity on social media puts a target on you where big business is concerned. The other side of that coin is that I can make a bloody good amount of noise about it.” The Amazon shut down of Tanya’s wishlist has been covered by mainstream media outlets DailyDot.com, Bustle.com and more.
Purr-fectly delicious cosplayer Tanya Tate is featured in the latest issue of Love It! magazine! Make sure to get a copy before they disappear!