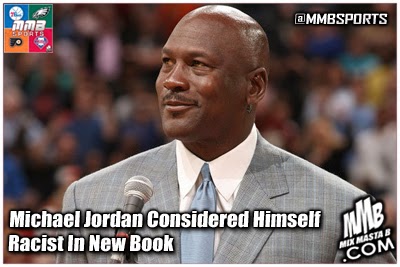 Michael Jordan reveals his past struggles with racism in a biography released last Tuesday.

In the book, titled "Michael Jordan: The Life," Jordan describes to author Roland Lazenby how growing up in the 1970s in North Carolina -- where he said the Ku Klux Klan was dominant -- shaped his views on race.


Those views were strengthened after he watched the miniseries "Roots" and learned about the suffering of his African-American ancestors.
The tipping point, Jordan said, came in 1977, when a girl at his school called him the N-word.
"So I threw a soda at her," Jordan says in the book, excerpts of which were detailed in the New York Post. "I was really rebelling. I considered myself a racist at the time. Basically, I was against all white people."
Suspended by the school for his actions, Jordan tells Lazenby that his mother intervened, urging him not to have racial hatred dominate his life.
Jordan also detailed how he was one of only two black players on the school baseball team and was called inferior while he played.
Now 51, Jordan went on to win six NBA titles with theChicago Bulls. He also took a break from basketball to try his hand at professional baseball.
Former Bulls general manager Jerry Krause says in the book that Jordan was powered throughout his life by any negative experiences, including those in his childhood.
"He remembers everyone who ever didn't think he was going to be great," Krause said in an excerpt published by Foxsports.com. "He remembers every negative story that's ever been written about him."
The book's release comes one week after Jordan, the owner of the Charlotte Bobcats, spoke out against Los Angeles Clippers counterpart Donald Sterling, who was taped making racing comments last month and since has been banned by the NBA.
"As an owner, I'm obviously disgusted that a fellow team owner could hold such sickening and offensive views," Jordan said in a statement. "... As a former player, I'm completely outraged.
"There is no room in the NBA -- or anywhere else -- for the kind of racism and hatred that Mr. Sterling allegedly expressed. I am appalled that this type of ignorance still exists within our country and at the highest levels of our sport. In a league where the majority of players are African-American, we cannot and must not tolerate discrimination at any level."
Posted by Mix Masta B at Monday, May 12, 2014