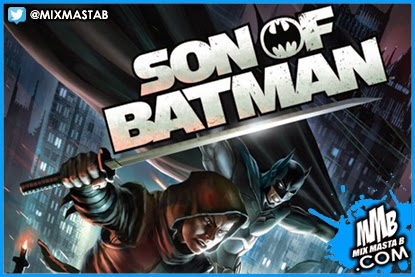 ‘Son of Batman’ is an adaptation of Grant Morrison and Andy Kubert’s 2006 ‘Batman and Son’storyline. The film was released on home media on May 6, 2014. This direct-to-video follow up to ‘Justice League: War‘ is a part of the new continuity established with Jason O’Mara reprising his role as Batman while David McCallum and Fred Tatasciore reprises their roles as Alfred Pennyworth from ‘Batman: Gotham Knigh’t and Killer Croc from ‘Lego Batman 2: DC Super Heroes’. In this feature,  Batman learns that he has a violent, unruly pre-teen son with Talia al Ghul named Damian Wayne who has secretly been raised by Ra’s al Ghul and the League of Assassins. When Ra’s al Ghul apparently dies after a battle with his former right-hand man Deathstroke, Batman must work to stop his long-lost son from taking revenge and guide him to a righteous path, in order for the pair to truly acknowledge each other as family.


Ok, so I’ve been really hard on the DC Entertainment movies lately, I wasn’t a fan of ‘Justice League: War‘ from both an animation and story standpoint, ‘Justice League: The Flashpoint Paradox‘ felt like a half measure and really should have been a trilogy of films and Superman: Unbound was essentially garbage. Basically, we’ve been burred on the three preceding DC Comics animated movies, which is painful considering how good ‘Batman: Year One‘, ‘Batman: The Dark Knight Returns‘ and ‘Superman vs. The Elite’ were. I’m happy to say, I thoroughly enjoyed this latest outing from our fine friends over at DC.

This film continues with the more anime look and feel as ‘Justice League: War’, however it just looks much better and less rushed. I have to say the introduction of Damian to the more mainstream audiences is exciting, and it was nice to have him back for at least a bit. I think my favorite part of this movie is the love given to Deathstroke! As a villain Slade Wilson is in the midst of a boom, he is featured in the CW Network’s ‘Arrow’ as the main season 2 villain played masterfully by Manu Bennett. Now in ‘Son of Batman’, he is again front in center battling the likes of Ra’s al Ghul, Batman and a new minted Robin.
The fight scenes in the movie are beautifully animated and are fun to watch over and over, the violence is toned down from ‘Justice League: War’, but still present and true to the source material. As great as the animation is, it is the voice cast that really makes this a fun experience. Stuart Allan, is a lot of fun as Damian walking the like of elite assassin and petulant 10 year-old. ‘Firefly’/’Serenity‘ alums Sean Maher and Morena Baccarin lend their voices as Nightwing and Talia al Ghul, and both do excellent work. The other great voice performances fall squarely on the shoulders of Thomas Gibson (‘Dharma & Greg’) as Deathstroke and Giancarlo Esposito (‘Revolution‘,’Breaking Bad’) as Ra’s al Ghul. While they only share the screen for a short portion of the movie, the back and forth is memorable and fun.
Ok, so this movie has been out for a while if you haven’t seen it yet, do. You can find it on iTunes and other digital outlets as well as on Blu Ray and DVD. I’d recommend the Blu Ray because of the cool special features:
All those great featurettes plus a sneak peek off the next DC Universe animated feature, ‘Batman: Assault on Arkham’ (a tie in directly to the successful ‘Batman Arkham’ games), featuring the Suicide Squad.
Ok, so there you have it, I’m finally happy with a DCU animated feature again, and have strong hope for the future.
Final Score: