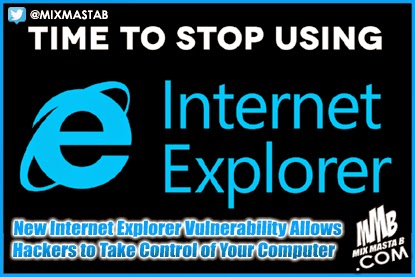 This weekend Microsoft announced that a vulnerability (now being called CVE-2014-1776), allows hackers to take control of Windows computers by taking advantage of “the way Internet Explorer accesses an object in memory that has been deleted or has not been properly allocated”. All versions of Internet Explorer from 6 to 11 are affected, and the attack is apparently already being used in the wild. If that doesn't make sense to you, here's the translation: If you use Internet Explorer to browse the web, stop.


A patch for recent versions of Windows is being worked on, but those using Windows XP are likely to be out of luck (Microsoft dropped support for the OS earlier this year).
There is an easy solution. Do a search for Firefox, download it, install it, and delete the blue "e" off of your desktop (or better yet uninstall the program completely). If those instructions make your brain blow a fuse, then have one of your kids do it for you.
The biggest problem here is that many of those who still use Internet Explorer, never put much thought into it. IE isn't a good browser, in fact it's a horrible browser (if you don't believe me just ask any web developer), but the fact that it ships with Windows has made it the default for the technically disinclined (like my mother for example). Unfortunately these are also the types that are least likely to be following tech news. (So if you have loved ones that get confused about how folders work or who look at you funny when you ask them what browser they use you might want to help them out a bit.)
The other thing to be aware of here is that unless Microsoft has a change of heart, and decides to issue an update for Windows XP, you would be advised to avoid using any computers running the software (even if you yourself don't use IE). For example if you are traveling and you find yourself in an internet cafe running XP on their computers it would be a really bad idea to visit your bank's website or to log into your Facebook account. Using a different browser won't do you any good if the computer itself is compromised.