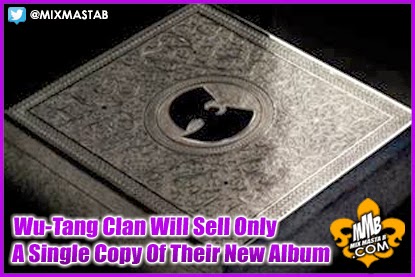 As music sales have dwindled over the years, artists have increasingly turned to making special editions of their albums to entice hardcore fans to spend more hard-earned cash — but there's never been an album quite like what Wu-Tang Clan is cooking up. In addition to releasing a 20th anniversary album this summer called A Better Tomorrow, the hip-hop collective also recorded a double album in secret over the last two years — and is only releasing one single copy of it.


As reported by Forbes, Once Upon A Time In Shaolin will be encased in a silver and nickel box crafted by British-Moroccan artist Yahya and will probably sell for millions of dollars. However, before it is sold, the one-of-a-kind album will tour the world as many other famous pieces of art do, with stops at museums, galleries, and potentially music festivals. Fans will be charged a cost to attend a "listening event," where they'll get a chance to hear the album on headphones after being carefully screened for recording materials.
"We're about to put out a piece of art like nobody else has done in the history of [modern] music," says Wu-Tang Clan member Robert "RZA" Diggs. "We're making a single-sale collector's item. This is like somebody having the scepter of an Egyptian king."
Once that exhibition tour is complete, Wu-Tang Clan will sell the album for an unspecified price in the millions of dollars — from there, its owner will be free to do what it wants with it. While it's too early to say who will shell out the cash for this unique item, Forbesspeculates that brands may be interested in the cachet of having this exclusive album; another option may include a wealthy collector purchasing it and either liberating the audio for the masses or keeping the songs for themselves.
"The idea that music is art has been something we advocated for years," says RZA. "And yet it doesn't receive the same treatment as art in the sense of the value of what it is, especially nowadays when it's been devalued and diminished to almost the point that it has to be given away for free." Whether or not Wu-Tang Clan is able to find enough people who want to go experience their album in a museum to make an impact remains to be seen — as does the viability of a multi-million dollar unique pressing of that album, but the group is OK with its plan going awry. "It might totally flop, and we might be completely ridiculed," says co-producer Tarik "Cilvaringz" Azzougarh. "But the essence and core of our ideas is to inspire creation and originality and debate, and save the music album from dying."
CREDIT / SOURCE - The Verge
Posted by Mix Masta B at Wednesday, March 26, 2014

Email ThisBlogThis!Share to TwitterShare to FacebookShare to Pinterest
Labels: A Better Tomorrow, Once Upon A Time In Shaolin, Wu-Tang Clan