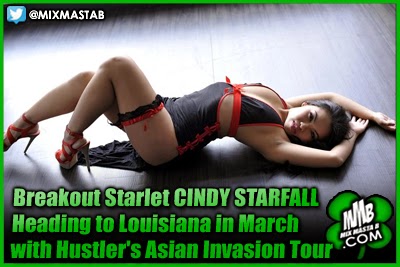 "I'm so excited to continue Hustler's Asian Invasion Tour in Louisiana!" Cindy said. "I can't wait to meet my fans and look forward to giving them a sexy, memorable performance each night."
Cindy will be available to meet and greet with fans after her performances and will have 8x10s, polaroids, DVDs and t-shirts from her recent men's line to sign and sell to fans.
Come see Asian bombshell Cindy Starfall in seductive, nightly performances at Deja Vu in Shreveport, LA from March 20th through March 22nd and at the New Orleans Hustler Club from March 26th through March 29th.
For more information on Cindy Starfall, please visit the Cindy Starfall network
www.CindyStarfall.netwww.CindyStarfallXXX.com www.Twitter.com/CindyStarfallwww.Facebook.com/CindyStarfalll
Posted by Mix Masta B at Saturday, March 15, 2014