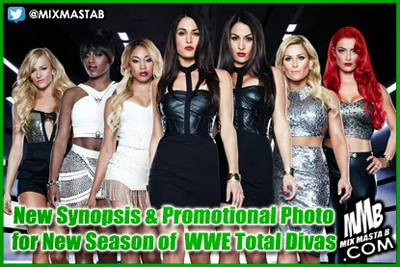 OK! Magazine has released a new synopsis and promotional photo for the next season of E!'s WWE Total Divas, which premieres on March 16th at 9pm EST.


"Eva Marie starts up a friendship with new cast member Summer, who both bond over being the new girl. Eva Marie, who’s becoming more and more popular with WWE fans, also secretly eloped with her boyfriend and her family is not going to be too thrilled when they find that out. Brie, meanwhile, is planning her wedding to Daniel Bryan, which is getting overshadowed by her twin sister, Nikki, whose on a break with her ex, John Cena.

As for Nattie? She’s going to be in the center of lots of the feuds this season, one with Summer (Nattie doesn’t like how quickly she’s risen to fame), and another with Ariane, who confronts Nattie about acting inappropriate at the Bella twins’ birthday party. Uh oh."
Posted by Mix Masta B at Monday, February 24, 2014