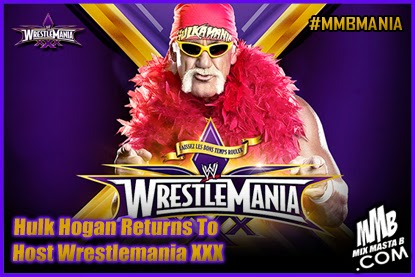 The red and yellow is back, brother.
WWE Hall of Famer Hulk Hogan has returned to WWE and will host WrestleMania 30 on Sunday, April 6, at the Mercedes-Benz Superdome in New Orleans. Hogan will make his long-awaited return to WWE on Monday’s Raw. He will also appear on WWE Raw Backstage Pass, airing live on WWE Network immediately following Raw.


“We are thrilled that Hulk Hogan has returned home to WWE,” WWE Chairman Mr. McMahon said. “It’s fitting to have him help us celebrate 30 years of WrestleMania and usher in a new era with the launch of WWE Network.”
A larger-than-life icon, Hogan was regarded as the “Face of WWE” when Randy Orton was still in snakeskin diapers. The Hulkster’s rise to sports-entertainment immortality began on Jan. 23, 1984, when he defeated The Iron Sheik in Madison Square Garden to become WWE Champion. That victory started a pop culture phenomenon known as “Hulkamania” with Hogan bringing WWE to international prominence with appearances on MTV, his own animated series and a definitive WrestleMania III main event against Andre the Giant in front of a record 93, 173 fans in the Pontiac Silverdome.
The Hulkster went on to become a six-time WWE Champion, and a WrestleMania icon, battling everyone from The Rock to 2014 WWE Hall of Fame inductee The Ultimate Warrior on The Grandest Stage of Them All. In 2005, Hogan was inducted into the WWE Hall of Fame by his “Rocky III” co-star Sylvester Stallone. His red and yellow boots have not touched a WWE mat since December 2007, but that will change this Monday night.

“Words cannot express how excited I am to be back in the WWE family,” Hogan said. “I only have one question for the WWE Universe: Whatcha you gonna do when Hulkamania runs wild as the host of WrestleMania 30?”
CREDIT / SOURCE - WWE.com
Posted by Mix Masta B at Sunday, February 23, 2014