Could The Rock Be Guest Hosting Wrestlemania? 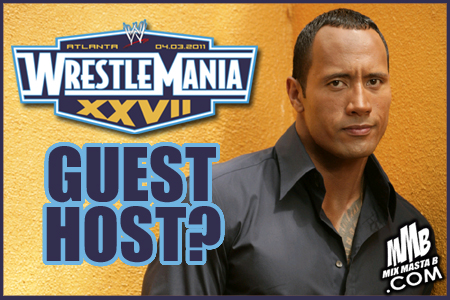 As you may all know TONIGHT we will find out who the special guest host is for WWE Wrestlemania 27 in Atlanta, GA. Rumors are going around it could be LeBron James, but he has a game that day vs the Nets. Bob Barker...maybe but is that big enough for an event this big? Tiger Woods? Well he's gonna want a big pay out and for someone who is trying to get their career back in line maybe being put out there like that could turn  golf traditionalists off. Justin Bieber? I guess if the WWE wants to put the biggest event on their schedule into his hands to carry (also he is signed to perform). One name that keeps coming up again and again is the great one, the most electrifying man in all of sports entertainment, The Rock.

McMahon said it himself this host will be hosting an event unlike no other and it takes a special person to host an event with a crowd this large. I'm thinking about 75,000 in the Georgia Dome and say I don't know..."the millions...& millions" of fans watching around the world.

The Rock keeps praising the WWE how much he loves the WWE but won't come back to wrestle. Vince knows he can cash in over and over again with The Rock and why not get him in the fold right now so that next year at Wrestlemania time in his hometown of Miami, Florida he is on good terms with the WWE (not that there are reports he isn't) and induct him into the WWE Hall of Fame. So in less then a half hour's time we should know if indeed The Rock or someone else is the guest host. - MIX MASTA B
Posted by Mix Masta B at Monday, February 14, 2011