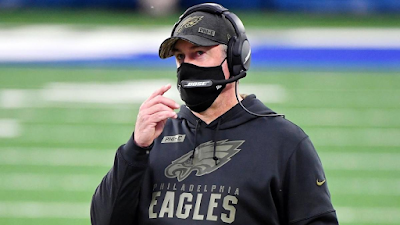 PHILADELPHIA -- The Eagles have fired coach Doug Pederson, a source told ESPN's Dan Graziano, ending a partnership that delivered the first and only Super Bowl title in the city's history.

Pederson was expected to remain as coach despite a 4-11-1 finish, but multiple meetings with owner Jeffrey Lurie over the past week left his boss unconvinced that Pederson had a sound vision for how to address the myriad issues facing the team, sources said, from navigating the Carson Wentz situation to fixing an offense that finished 26th in scoring (20.9 PPG) and 28th in passing yards (207.9 YPG) in 2020.

Lurie was also not sold on Pederson's plans regarding his coaching staff, sources said. Pederson pushed for passing game coordinator/quarterbacks coach Press Taylor to be elevated to offensive coordinator rather than bringing in a more established candidate. The issue of how to fill the void left by defensive coordinator Jim Schwartz, who plans to take the year off from football in 2021, was also unresolved.
Posted by Mix Masta B at Monday, January 11, 2021