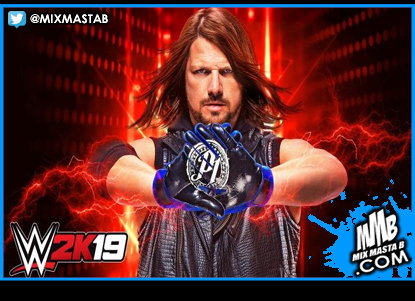 WWE 2K19 now has a Phenomenal cover Superstar and a path to WWE video game immortality.

2K has named AJ Styles as the cover Superstar of the upcoming edition of the WWE video game franchise. The world-renowned video game publisher unveiled its choice and other details about WWE 2K19, most notably the debut of the Million Dollar Challenge, during a press conference today.

Styles, the two-time WWE Champion who successfully retained his title at Money in the Bank 2018, attended 2K’s press conference. He expressed excitement and gratitude about being chosen for 2K’s highest honor.


“As a hardcore gamer and ambassador of everything it means to ‘Never Say Never’ in both my professional and personal life, it is a dream come true to be selected as the WWE 2K19 cover Superstar,” he said.

The Phenomenal One joins an elite group of grapplers who previously served as the face of the WWE 2K franchise. 2K’s past choices for the coveted role include “Stone Cold” Steve Austin, The Rock, John Cena, Brock Lesnar and Seth Rollins, who graced the cover of last year’s game.

In addition to its cover Superstar selection, 2K introduced the WWE 2K19 Million Dollar Challenge. This competition, introduced by Styles during the press conference, will put players on a path to facing The Phenomenal One for a chance to win $1 million.

Players must beat a to-be-announced new mode in the game.
Then, players can submit a promotional video proving they can beat AJ Styles in WWE 2K19.
From there, four semifinalists will be selected for a semifinal round of competition.
One player will then earn the chance to compete against AJ Styles one-on-one in WWE 2K19. The prize? One million dollars.
2K will announce more details about the WWE 2K19 Million Dollar Challenge in the months to come. For complete rules including eligbility requirements, please visit: wwe.2k.com/milliondollarchallenge/rules

When they purchase their copy later this year, players will also be able to choose from multiple editions of WWE 2K19. 2K introduced multiple premium editions of this year’s game, which include:
Additional details about what will be offered in each edition will be announced by 2K this summer.
WWE 2K19 is not yet rated by the ESRB and is scheduled for worldwide release on Oct. 9, 2018.