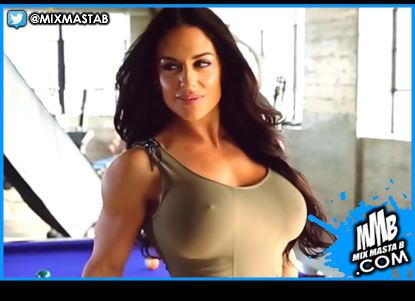 Former WWE Diva Kaitlyn (Celeste Bonin) announced in February of last year that she split with her husband, PJ Braun. The couple got married in June of 2014. In the video above, Bonin spoke with Jim Varsallone of the Miami Herald about the divorce and the changes she had to go through.

"2017 was such a pivotal year for me," Bonin said. "I decided to leave my marriage in February of last year, so, it's almost been a year. Then, the whole struggle of the divorce, moving, restructuring my company [Celestial Bodiez], [and] getting new employees. All of that stuff was so ugly. ... I went through a huge period of self-doubt, the biggest decision was to leave my marriage, because I didn't know- could I run my business on my own? How is my life going to be? Because, I went from the limelight of WWE to being married and having a partnership with the person I married. And then the next step is to leave all of that, am I going to be able to do that on my own? Yeah, that was a huge mental struggle for me."
Last October, Bonin went public with her recent drug addiction issues in hopes that she could help others.


"In October of that year, I made a post on social media about going through drug addiction and having to go through a rehab situation, and all that," Bonin replied. "I just felt like, oh my God, I've gone through all these crazy things this year and it would be a shame to not share it with others, who I know are also struggling with things like that and to tell them, 'Hey, it's okay. Everybody goes through stuff like this.'"
Bonin continued that the drug addiction worsened due to the bad parts of her marriage, and that's when she realized change was needed to feel like herself again.
"It was during the really bad times in my marriage," Bonin said. "That fueled a lot of [the addiction], and it was just a series of events that led to 'Okay, I really have to change my life.' It was the same thing too with my marriage, I just wasn't happy, I didn't feel like myself. I didn't feel like my company was representative of me and the things I believe in. 2017 was the year of ripping the Band-Aid off, and starting new stuff, and being me again."