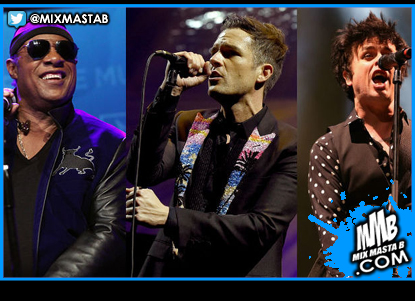 Global Citizen Festival 2017 is coming back and the star-studded roster includes folks like Stevie Wonder (and special guests), Green Day, The Killers, The Lumineers, The Chainsmokers and more.
The annual charity concert, which will take place at Central Park's Great Lawn on September 23, will also include special guest performances by Pharrell Williams, Big Sean, Andra Day, Alessia Cara, and more to be announced at a later date.
As they always do, Global Citizen is giving away tickets to those who are taking part in charity tasks via their official website. It's all for the greater goal of ending extreme poverty and other worldly issues.
"Over the last year, we've seen voters around the world reject the nationalism and isolationism that keeps people living in extreme poverty," says Hugh Evans, CEO of Global Citizen. "Now, we are calling on activists and music fans to use their voice to change the world. We couldn't be more thrilled to be announcing this incredible lineup for Global Citizen. Now more than ever, we need to ensure we work together for the world’s poor."