Dave Chappelle On Donald Trump: 'He's Like A Bad DJ At A Good Party' #MMBPop 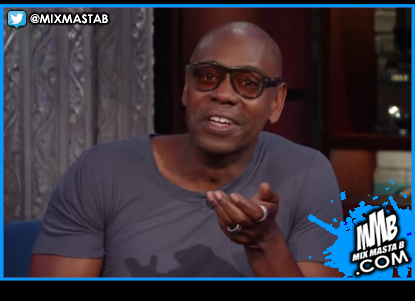 Dave Chappelle stopped by The Late Show on Wednesday (Aug. 2) to discuss his August residency at Radio City Music Hall and more.

While speaking to the show's host, Stephen Colbert, the comedian also revisited his popular Saturday Night Live monologue where he told people to give Donald Trump a chance as president. Chappelle admitted that he was never really for giving Trump this opportunity.
"It's not like I wanted to give him a chance that night," Chappelle told Colbert. "[But] I feel like a lot of white Americans finally got to see what an election night looks like for many black Americans every cycle." He continued to say that Trump being the controversial president he is right now will make future voters pay attention to who they elect the next time around.
"In the last six months I think we're all getting an education about the presidency," Chappelle said. "I don't know that I've ever heard in the popular discourse people discussing ethics this much. And I didn't even realize how ethics were necessarily supposed to work at that level of government, and he's putting all this stuff on the forefront.
The funnyman added: "I think [Trump]'s gonna make a more informed and better voter. He's a polarizing dude. He's like a bad DJ at a good party."
Chappelle will be continuing his residency at Radio City Music Hall until Aug. 24. You can get tickets to his shows here.
Posted by Mix Masta B at Thursday, August 03, 2017