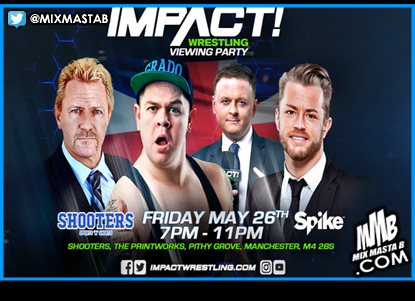 Fans in the United Kingdom, Come hang out with IMPACT Wrestling on Friday, May 26th, 2017 in Manchester, UK at Shooters Sports Bar! This is a once in a lifetime opportunity to view that week’s episode of IMPACT Wrestling alongside IMPACT Wrestling Hall of Famer Jeff Jarrett, Jeremy Borash, Grado, and Rockstar Spud.
The party will begin at 7PM for VIP ticket holders only. General Admission begins at 8PM and the entire party ends at 11 PM.
General admission is FREE but due to numbers being limited you must secure your spot at the event by paying a £5 deposit which will be refunded on the night in the form of a £5 bar tab.


VIP Tickets are £35 and include the following:
– Early entry at 7PM where you will be able to mingle with the stars of IMPACT prior to the general admission ticket holders being allowed in to the party.
– You will have a reserved seat for the whole event. During the broadcast of the IMPACT episode itself, you will be joined at your table by the four IMPACT Wrestling stars so you can have specific time to talk at length with all of the stars. These tables will be limited to a maximum of 10 people to ensure you get plenty of time to chat with Grado, Jarrett, Spud and JB.
– A unique 8×10″ print signed by all four IMPACT Wrestling stars at the event.
– An opportunity to have a posed photograph with each of the stars.
Before IMPACT Wrestling begins at 9PM you will hear from all the stars present and also get to take part in the UK’s first ever IMPACT Wrestling quiz. Great prizes are on offer if you can prove to be the UK’s most knowledgeable IMPACT Wrestling fan.
What: A LIVE IMPACT Wrestling viewing alongside Jeff Jarrett, Jeremy Borash, Grado, and Rockstar Spud!
Where: Shooters Sports Bar, The Printworks, Withy Grove, Manchester, M4 2BS
When: Friday, May 26, 2017

Tickets are available to over 18’s only. ID may be required.
Get all ticket information HERE
Posted by Mix Masta B at Tuesday, May 23, 2017