The History Of The GFW Global Title #MMBImpact 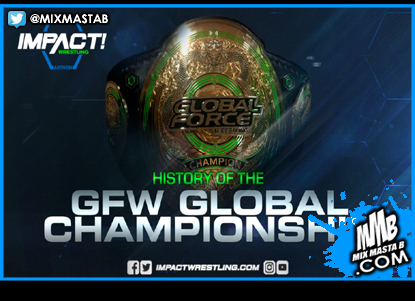 The GFW Global Title has been the conversation piece of IMPACT Wrestling for the last several weeks. Is it a Golden Ticket? Does the holder of this title automatically deserve a match against Lashley for the World Title at Slammiversary? Magnus thought so, but then he lost the title. Magnus was not only the former champion, he was also the first Global Champion. Magnus was GFW Global Champion for 547 days. Well over 1 calendar year.


Magnus won the title in Las Vegas, NV on October 23rd, 2015 defeating Bobby Roode for the title. Now, Alberto El Patron holds the championship, but does El Patron hold the right to face Lashley? According to IMPACT Management, the answer is simply, no.
As we wrote about earlier today, it will be EC3 vs. James Storm vs. Magnus in a Triple Threat on Thursday night to decide who challenges Lashley on July 2nd on Pay Per View in Orlando, FL.
We have reached out to El Patron for comments, but have gotten no response in return. We hope to have more on this story this week on IMPACTWrestling.Com.
Posted by Mix Masta B at Tuesday, May 23, 2017