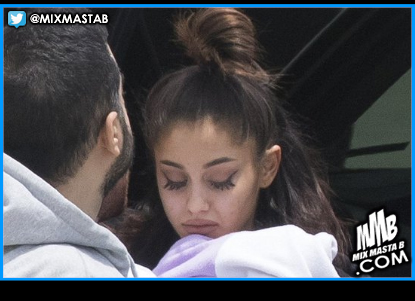 Less than 24 hours since the devastating terror attack at her Monday night (May 22) show in Manchester, Ariana Grande has arrived back to the United States as she was photographed landing in Boca Raton, Florida.

Grande was greeted by her family and boyfriend Mac Miller at the airport, which is about 30 mins away from her hometown area of Coconut Creek. "Mac waited for Ariana at the bottom of the [private jet] stairs," a source told PEOPLE. "She looked distraught and like she has been crying. They hugged for a while before they headed to a waiting car. Ariana’s mom Joan was with her."
As you can imagine, Grande is extremely torn over the tragedy. "It’s so, so sad. She loves her fans and is absolutely crushed and devastated as you can imagine. She can’t believe this happened," another source added. "She just wants to be with her family and loved ones right now.”
At time of press, a total of 22 fatalities and 59 injuries had been reported because of the attack. Authorities believe the suspect, 22-year-old Salman Abedi, is dead. In addition, a 23-year-old male has been arrested in connection to it all, and the Islamic State has claimed responsibility.