Rihanna Shuts Down Beyoncé Feud Rumors: "We Don't Need to Be Putting Black Women Against Each Other" #MMBMusic 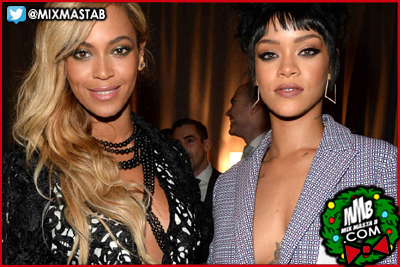 Rihanna wants no part of these rumors.
The pop star, who recently was honored with eight Grammy Award nominations on Tuesday, has become the center of feud speculation involving her and fellow music icon Beyoncé.
With coinciding hit albums Lemonade and ANTI, the songstresses were a staple on the nod list this year with a combined 17 nominations. However, some fans mused there would be trouble between the women after Rihanna's album failed to receive nods for Best Album of the Year and Best Song of the Year while Lemonade did.

RiRi accidentally added fuel to the fire when she liked a photo with a controversial caption on a fan Instagram account. The caption read, "Congrats and all to @badgalriri and all for her 8 Grammy nods but tbh f--k them because they snubbed her for Song of the Year and Album of the Year."
"I think they didn't want her tied or passing someone else *cough cough* [lemon emoji]," the caption continued, referencing Beyoncé's latest work.

#RiRi responds under the picture she liked that had the #Beyhive and #Navy going crazy to clear things up. #Grammys #Beyonce #Rihanna #Anti #Lemonade
A photo posted by The Shade Room (@theshaderoom) on Dec 7, 2016 at 4:23am PST


Rihanna issued an additional comment to explain herself. "I never actually read your caption, thought the pic was funny and moved right along!" she wrote in the comments section of the photo.

"Til I seen it pop up over and over! I'm petty af, yes. But this is just unnecessary! I wish y'all would drop this topic and see things from the bigger picture! We don't need to be putting black women against each other! We deserve to be celebrated, and the Grammy Academy agrees!"

This certainly is not the first time the stars have been pitted against each other over in course of their careers, especially since they're two of the biggest singers of our time. However, Rihanna has kept her head held high above the noise, telling Vogue that it's not something she focuses on.

Plus, she's looking on the bright side. When another fan Instagram account claimed Rihanna had been snubbed by the Grammy's, she fought back. "How could y'all say that? 8 nominations later! God is great!!!" she reportedly commented.