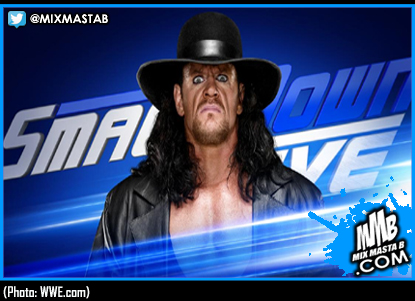 As SmackDown celebrates its milestone 900th episode at the Mohegan Sun Arena on Nov. 15, The Deadman rises to commemorate the momentous occasion, appearing in Wilkes Barre, Pa., for the first time in a decade.


The Undertaker has long been a cornerstone of Team Blue, and his emergence on this special episode of SmackDown LIVE is undoubtedly linked to The Phenom’s storied history with the brand. This marks The Undertaker’s first appearance in a WWE ring since he defeated SmackDown LIVE Commissioner Shane McMahon inside Hell in a Cell at WrestleMania 32, so whatever The Deadman has planned, mere days before Raw and SmackDown LIVE collide at Survivor Series, you won’t want to miss it.
The 900th episode of SmackDown LIVE airs Nov. 15 at 8/7 C on USA Network. To experience it live, order tickets by clicking here.
Posted by Mix Masta B at Thursday, November 03, 2016