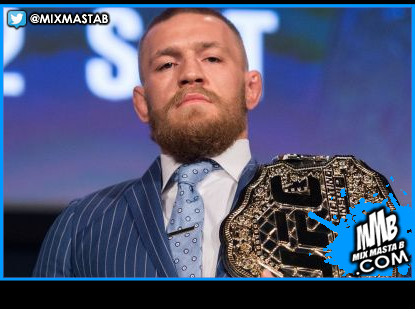 Another confrontation appears to be brewing between UFC officials and one of their most popular fighters, Conor McGregor. Things could come to a head if “The Notorious” leaves the UFC 205 main event with two belts in his possession.
McGregor (20-3 MMA, 8-1 UFC), the UFC featherweight champion who attempts to add lightweight gold to his collection when he challenges fellow champ Eddie Alvarez (28-4 MMA, 3-1 UFC) in next month’s UFC 205 headliner, wants to become the first fighter in UFC history to simultaneously hold two titles.
Although he’s yet to defend the 145-pound belt he won with a 13-second knockout of Jose Aldo at UFC 194 in December, the organization is allowing McGregor to hang on to it and go for history at UFC 205. However, if he’s successful, he apparently won’t hold both belts for long.


UFC President Dana White said there’s no chance McGregor will keep both titles and bounce back and forth between divisions to defend each one. That means the brash Irishman will have an important decision to make, White told “UFC Tonight” on FS1.
“If he wins, he’ll hold two belts,” he said. “Then he’ll decide which one he wants to give back to me. He can’t hold both. He’ll have accomplished this. Then he’ll have to figure out which one he wants to give up. He can’t hold up two divisions.”
UFC 205 takes place Nov. 12 at Madison Square Garden in New York City. The main card airs on pay-per-view following prelims on FS1 and UFC Fight Pass.
Despite White’s comments, McGregor said said he will not simply follow the UFC’s demands. The Irishman held two titles simultaneously for the European-based Cage Warriors organization prior to joining the UFC and has made fighting and defending UFC gold in two weight classes part of his long-term plan for quite some time.
Only Randy Couture and B.J. Penn have managed to captured belts in two different UFC weight divisions during a single career, but neither held two belts simultaneously. McGregor would etch a new page in the record books if he can get past Alvarez, and he’s made it clear that he’s not going to give up a UFC title without a fight.
“I’m going to wrap one on one shoulder, I’m going to wrap the other on the other shoulder, and you’re going to need a (expletive) army to come take them belts off me,” McGregor said at a September’s UFC 205 press conference. “They’re going to have to gather an army to try to take one of them off me. And that’s telling it straight. One’s going to be there, one’s going to be there, and I’m going to be picking and choosing who I want to destroy next.”
CREDIT // SOURCE - Mike Bohn // MMAJunkie
Posted by Mix Masta B at Friday, October 14, 2016