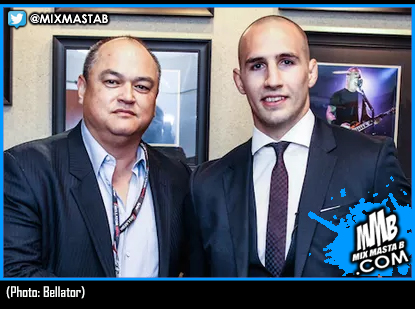 Rory MacDonald to Bellator is official. The signing, which MMA Fighting reported earlier this week as close to done, was announced on the Friday broadcast of Bellator 160as "an exclusive multi-year, multi-fight deal."


"There's no denying that Rory MacDonald was the cream of the crop when it comes to free agents in MMA," Bellator president Scott Cokersaid in a statement.


"As I say all the time, if there is a free agent out there, we're going to talk to them, if they fit our model we're going to make a hard push to bring them over here. I'm very happy that we were able to work out a deal with Rory, and I can't wait to see him bring his menacing style to the Bellator cage."
MacDonald, 27, is widely considered to be one of the most talented welterweights in the world. Nicknamed "The Red King," MacDonald enters Bellator following a sterling 9-4 run under the UFC banner, during which the young Canadian defeated a host of high-level opponents that included current UFC welterweight champion Tyron Woodley, top UFC contender Demian Maia, UFC Hall of Famer B.J. Penn, and popular lightweight Nate Diaz.
Of late, MacDonald (18-4) fell short in his bid for the UFC welterweight title against Robbie Lawler, losing via fifth-round TKO in one of the most celebrated mixed martial arts fights of all-time. MacDonald then dropped a unanimous decision to No. 1 ranked welterweight contender Stephen Thompson in a bout that proved to be MacDonald's last in the UFC.
"There are multiple reasons why I choose to fight for Bellator MMA and Scott Coker," MacDonald said in a statement. "One, they have given me the opportunity to develop and grow a business together. Two, because I already feel respected by the promotion as a professional athlete. And last but not least, because Bellator is offering a setup that no-one in the world can offer me."
MacDonald now joins a Bellator welterweight roster that includes Bellator champion Andrey Koreshkov, Paul Daley, Michael Page,Douglas Lima, and part-time lightweight/part-time welterweightBenson Henderson, among others.
CREDIT // SOURCE -  Shaun Al-Shatti // MMAFighting.com
Posted by Mix Masta B at Saturday, August 27, 2016