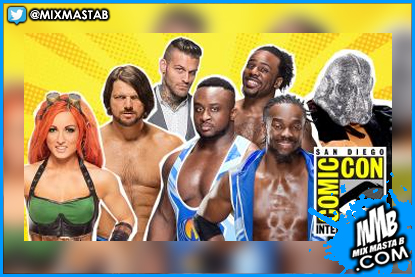 Each year, WWE and Mattel team up for San Diego Comic-Con International to bring you the biggest reveals and your favorite Superstars at the annual celebration of all things pop culture. This year’s event promises to be the biggest yet, with WWE Tag Team Champions The New Day, AJ Styles, Becky Lynch and The Shockmaster — yes, that Shockmaster — hitting the show floor with Mattel, who’s bringing exclusive unveilings and an in-depth look at their upcoming action figure lines to SDCC.

The festivities at the San Diego Convention Center kick off Thursday, July 21, at 1 p.m. PT, with an interactive panel moderated by Corey Graves, in which The New Day, AJ Styles and Becky Lynch join Mattel in revealing upcoming, never-before-seen action figures and answering questions from the WWE Universe. Not going to SDCC? WWE’s social media team has you covered, and will be streaming the panel in real-time via Facebook Live.
In addition to snagging an exclusive Dean Ambrose Mighty Minis action figure at the Mattel booth (#3029), SDCC visitors can get their hands on an exclusive Elite Flashback Series action figure of The Shockmaster, which immortalizes one of the most infamous personas and moments in WCW history. The Shockmaster himself will be live in San Diego during the week’s lineup of Superstar signings at the Mattel booth, listed below.
Thursday, July 21, 2:30 p.m. – 3:30 p.m. PT: Kofi Kingston, Big E and Xavier Woods
Friday, July 22, 11 a.m. – 12 p.m. PT: AJ Styles, Becky Lynch and The Shockmaster
Stay with WWE.com and WWE’s social media channels, including Facebook, Twitter, Instagram and Snapchat, for live updates and exclusive content from the floor at SDCC!
Posted by Mix Masta B at Friday, July 08, 2016