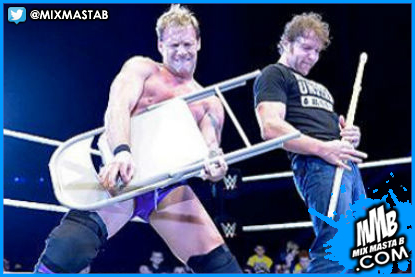 The Wrestling Observer's Dave Meltzer notes this week that the original WrestleMania 32 plan for Chris Jericho and Dean Ambrose was a match against each other.
The former Undisputed WWE Champion was supposed to turn heel on Ambrose, sparking a feud between the two talented superstars.


Those plans didn't materialize, as AJ Styles's arrival in WWE led to a program between Jericho and "The Phenomenal One." The rivalry-turned-partnership-turned-war culminated with a singles bout at the show of shows, while the increasingly popular Ambrose was placed in a disappointing (but undoubtedly lucrative) match with Brock Lesnar.
Jericho made a surprise return at last year's Night of Champions Pay-Per-View, joining Ambrose and Roman Reigns in a match against The Wyatt Family. Jericho was choked out by Braun Strowman, losing the match for his team. Afterwards, he angrily walked out on his partners, but there was no follow-up. The next time Y2J was on television, he was a babyface, and any issues with Ambrose and Reigns had been dropped.
Still, the Jericho-Ambrose feud may be in cards for Payback. At Tuesday's Smackdown tapings, Dean Ambrose scored a victory over Tyler Breeze. As Ambrose headed to the back, Chris Jericho came out for his main-event match, and the two reportedly had a tense staredown.
CREDIT // SOURCE - What Culture
Posted by Mix Masta B at Saturday, April 09, 2016