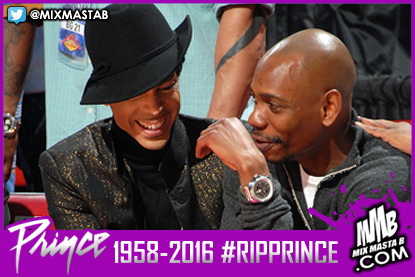 “This is black 9/11," the comedian reportedly said.

Dave Chappelle was so distraught when he learned Prince had died, he almost canceled a stand-up show he had planned in San Francisco.

But Chappelle went on because that's what Prince would have wanted, theSan Francisco Chronicle reported him as saying.


“This is black 9/11," Chappelle told the crowd at the Chapel on Friday night (April 23), according to The Chronicle.
Chappelle dedicated most of the four-hour show to Prince and reminisced about their time together and what the iconic musician meant to him, according to The Chronicle.
Chappelle and Prince were forever intertwined after the 42-year-old comedian portrayed Prince in one of the most famous skits on his former Comedy Central show.
Fans loved the skit and so did Prince, Donnell Rawlings, Chappelle's Show cast member, told The Hollywood Reporter.
"He thought it was hilarious," Rawlings says of Prince's reaction. "And I think [Chappelle and Prince] really built a friendship after that sketch."
Chappelle told the audience at the Chapel he learned of Prince's death when he started getting calls from reporters for comment.
“I kept wondering all day, ‘Why are they calling me?’” Chappelle reportedly said. “I’ll tell you what: I didn’t know him well, but I knew him well.”
In a 2014 interview with Tonight Show host Jimmy Fallon, Chappelle marveled about Prince using his own joke against him when he featured a photo of Chappelle dressed as Prince on the cover of his September 2013 single "Breakfast Can Wait."
"That's a Prince judo move right there. … You make fun of Prince in a sketch and he'll just use you in his album cover," Chappelled told Fallon. "What am I going to do -- sue him for using a picture of me dressed up like him? ... That's checkmate right there."
CREDIT // SOURCE - Ryan Parker // Billboard
Posted by Mix Masta B at Sunday, April 24, 2016