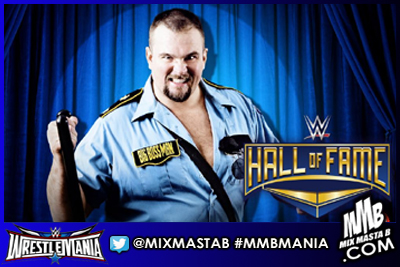 
Boss Man, a former Cobb County, Ga., corrections officer turned sports-entertainer decked out in full police uniform, first debuted in WWE in the late ‘80s. Managed by the legendary Slick, the ruthless Boss Man gained notoriety for not only defeating his opponents with ease, but also handcuffing them to the ropes and then bashing them with his patented nightstick. Though he had no trouble muscling opponents around, Boss Man was also deceptively quick and agile for a performer who weighed over 300 pounds, often being heralded as one of WWE’s best, and most unique, athletes. He had memorable encounters with the likes WWE Hall of Famers Randy Savage, Koko B. Ware and Shawn Michaels, and he also joined forces with another monstrous Superstar, Akeem, to form the titanic tag team known as The Twin Towers.
Though he initially displayed a warped view on justice, the former cop eventually showed that he did have morals. When “The Million Dollar Man” Ted DiBiase attempted to procure his services, The Big Boss Man declared that he couldn’t be bought. The bold move led to Boss Man becoming one of the WWE Universe’s most beloved Superstars, an enforcer of law and order who made evildoers pay for their transgressions. This new demeanor from the Boss Man led to his participation in some of the more unique matches of the 1990s, such as a Jailhouse Match against The Mountie at SummerSlam 1991, where the loser spent the night in a New York City jail, and a Nightstick Match with ex-con Nailz at Survivor Series 1992.
Boss Man went on to compete around the world for several years in the mid-‘90s, including a stint in WCW, before returning to WWE in 1998. Adorned fully in black riot squad gear, Boss Man became Mr. McMahon’s personal security detail in the villainous Corporation. He faced off with “Stone Cold” Steve Austin, Mick Foley and The Undertaker, as well as captured the World Tag Team Championship and, on four occasions, the WWE Hardcore Championship. The Big Boss Man also engaged in infamous rivalries with Big Show and Al Snow, the latter of which resulted in one of the more notorious matches in history, the Kennel from Hell Match, at Unforgiven 1999.
Although the Boss Man passed away in 2004, the memories he created for the WWE Universe will surely live on forever. Because of that, he will be rightfully celebrated as the newest member of the hallowed WWE Hall of Fame on April 2, the night before WrestleMania 32!
Posted by Mix Masta B at Monday, March 07, 2016