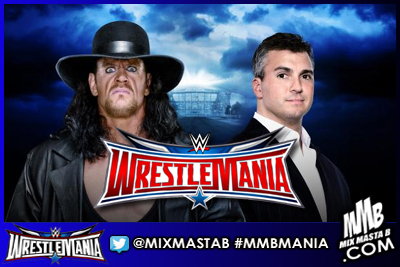 The Undertaker has WWE in his veins. He’s been a fixture in the company through thick and thin, destroying opponents and earning respect from the locker room for 25 years and counting. At WrestleMania, though, he’ll stand inside Hell in a Cell across the ring from someone born into WWE royalty and eyeing control over its flagship program Raw: Shane McMahon, the grandson of WWE’s founding father and son of WWE’s current Chairman.

Shane-O-Mac started his career in the WWE warehouse at age 15, fulfilling merchandise orders. In the 25 years that followed, Shane led several departments behind the scenes and rose to the position of Executive Vice President of Global Media, while also becoming a major player on WWE TV. But in 2010, he decided to leave WWE and create his own path, pursuing other business ventures in China, far from the shadow his father Mr. McMahon cast.

On the Feb. 22 Raw, though, Shane unexpectedly returned to WWE to interrupt his sister Stephanie McMahon from becoming the first recipient of the Vincent J. McMahon Legacy of Excellence Award. After Mr. McMahon lauded Stephanie for having a “good-hearted soul,” Shane cut off her acceptance speech, irreverently dancing to the ring in a suit and a pair of Air Jordan 1s — a testament to his laid-back, yet corporate, demeanor.

Shane rejected his father’s hug and handshake before saying Stephanie did not earn this new honor. Shane then told his father that he wanted control of Monday Night Raw to ensure the company’s future, which Mr. McMahon agreed to on one condition: Shane defeats The Undertaker at WrestleMania in a Hell in a Cell Match. If Shane loses, he must surrender a lock box of family secrets to his father.

The Undertaker may be known as being one of the toughest Superstars to ever step inside the ring, but the same can be said for the much smaller Shane, who is 2-0 at WrestleMania. He battles like a jungle cat: He’ll knock you off your feet with his sharp punches and pounce through the air to take down prey. Unlike most billionaire’s sons, Shane has proven that he’ll go crashing through anything — be it glass or gravity — for a win.

That death-defying is needed inside the dreaded Cell, the Devil’s Playground where Undertaker has tortured souls since the match’s inception in 1997.

Will Shane prevail in WWE’s most dangerous match against its most feared competitor to take control of WWE? Watch Shane McMahon try to topple The Undertaker inside Hell in a Cell at WrestleMania, live on WWE Network on April 3 at the special start time of 7 ET/4 PT.