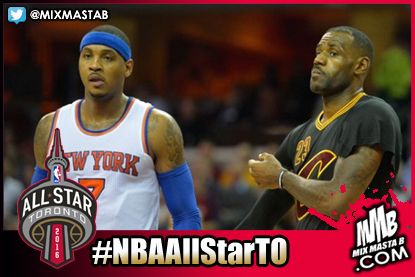 I am sure some people think this is just more trade deadline rumors but this story seems to have some legs to it. It sounds very possible that Carmelo Anthony could wind up playing side by side with Lebron next week if people involved in the trade talks get their way.
Frank Isola of the Daily News wrote the story and had all the details.

Carmelo would have to waive his no trade clause which he would at least consider to play on a winning team and play with someone as great as Bron. The trade would also involve Kevin Love being sent to the Boston Celtics. The Knicks would get a couple draft picks and players in return to help them continue to build their future around Porzingis.
Melo for his part continues to publicly stand by the Knicks, repeatedly saying he doesn’t want to go anywhere. Behind the scenes however it is very possible he is singing a different tune. He is approaching the down side of his career and it is clear he will never win a title being the alpha member of a team. He needs to play more of a role instead of carrying the entire burden and playing with Lebron would help with that.
On Friday, Anthony bemoaned not having a proven star as a teammate and revealed that he’s had talks with fellow All-Stars about joining forces.
“I think everybody kind of dreams and hopes that they can play with another great player, another star player. It’s a star player’s league,” Anthony said. “I think that’s what we talk about when we all get together — ‘I want to play with you, I want to play with you.’ Even here different guys say, ‘Come play with me, come play with me.’ So that’s always the mindset. Sometimes it happens, sometimes it don’t. But I think everybody that’s in my situation, that’s in my position, they all want the load off especially the older they get. Because you realize you just can’t do it all by yourself. Everybody knows that.”
Make what you guys want of this rumor but don’t be shocked if it happens in a few days.