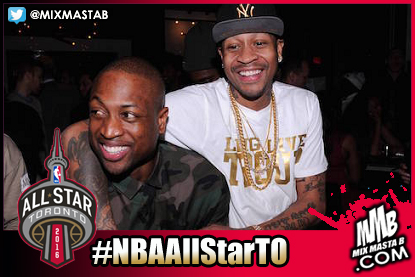 Allen Iverson’s impact on the NBA and culture has a whole can never be understated. Perhaps only Michael Jordan and maybe Kobe Bryant have impacted the youth and future ballers in the way Iverson did. Two of those younger ballers named Dwyane Wade & Chris Paul would grow up to become stars themselves but the jersey number they wear is all due to AI.

Wade took to Instagram while up in Toronto for All Star weekend and shared a picture of himself, Iverson and Chris Paul. The caption that came with it was all you needed to know about how much Iverson’s impact was.

This guy in middle is the reason we wear number 3.. He was the illest… Three of the coldest to Don the number 3 jersey.. Do we agree???

I think we would all agree Dwyane!
Posted by Mix Masta B at Saturday, February 13, 2016