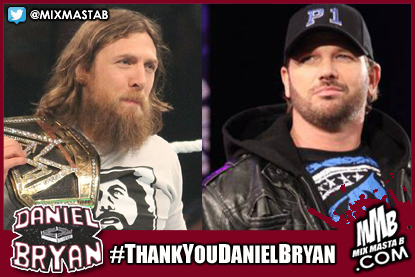 Over the last couple of years, WWE has had two separate sets of babyfaces – the company-chosen and pushed ones like John Cena and Roman Reigns, and the fan-chosen underdogs like Daniel Bryan and CM Punk, and when Mr. Punk abruptly removed himself from the WWE universe in January of 2014, Daniel Bryan took sole ownership of the “people’s champ” title.


CM Punk’s WWE departure, with a little help from the fans, forced WWE to put Daniel Bryan in the main-event scene at WrestleMania 30, instead of having him wrestle in a meaningless mid-card match against Sheamus, which was the original plan.

Of course, CM Punk was originally scheduled to wrestle, and defeat Triple H, which was a role that Daniel Bryan gladly filled, earning him a spot in the WrestleMania 30 main-event, where he won the WWE World Heavyweight Championship in one of the greatest moments in WrestleMania history.
Sadly, Bryan’s WWE Title win in 2014 may have been his very last, as he is currently battling concussion issues, which have kept him away from the ring.

During his time away, Bryan has been cleared by several non-WWE doctors, but WWE’s head of medical, Dr. Joseph Maroon, has refused to clear the former WWE Champ, saying that he has suffered too many concussions throughout his professional wrestling career.
Some WWE fans have questioned WWE and Dr. Maroon’s reasoning for not clearing Bryan, thinking that there is some sort of conspiracy theory in the works between WWE management, and WWE’s head of medical.

Basically, the theory is that WWE wanted to get rid of Bryan, at least until WrestleMania 32 has concluded, so he won’t get in the way of the show’s main-event plans like he has in the previous two years. In fact, there are some in WWE who believe that Roman Reigns would have been accepted as the company’s top babyface last year if they hadn’t allowed Daniel Bryan to return.

The fan-conspiracy theory got fed even more when WWE brought back Tommy Dreamer, who just a couple of months beforehand appeared on “Stone Cold” Steve Austin’s podcast to talk about concussions in professional wrestling. During the interview, Dreamer admitted to having suffered anywhere between 13 and 16 concussions during his pro wrestling career, and he admitted to having memory issues at times, saying that often times he doesn’t even remember what year he got married, and that he’s asked his wife more than once about the year they decided to tie the knot.

You can check out the transcript below.

“I have a few regrets. My one regret is at times my memory… I can remember anything about wrestling, anything, but before… I don’t know what year I got married. I would have to call my wife and say ‘what year did we get married?’ Or my wife will say ‘you already asked me that’ and I’ll be like ‘really?’ Or, the other day I came home from wrestling, I pulled my bags out, I went — it was about 3 o’clock in the morning — I got home and the next morning my wife comes up and goes ‘are you okay?’ I said ‘yeah.’ She goes ‘did you get hit in your head or anything?’ I said ‘no, why?’ And when she first comes into your room and goes ‘can I talk to you’ you’re like ‘oh god, what did I do now, am I in trouble?’ And she’s like ‘well, I went outside to throw out the garbage and you left your trunk open and it rained. Why didn’t you close your trunk?’ I said ‘I can’t tell you that. I don’t know why.’ Or I’ve left the refrigerator door open. Now I have an alarm on my refrigerator door that goes off if it’s open. That scares me. Or even with my daughter, ‘how was school, blah blah blah,’ and then I’ll ask them something and ‘dad, you already asked me that.'”

Dreamer also appeared on TSN’s Off the Record with Michael Landsberg, and where he was asked about the amount of concussions he has suffered, and how they’ve effected him. You can check out that clip below.

The doctors that have cleared Bryan have told him that he has no issues, and that his mind works a lot better than most people his age that have suffered the same amount of concussions. In fact, they have told him that his mind functions better than most people who are his age, and younger, that haven’t ever suffered a concussion. So the fact that WWE is willing to clear a guy who has admitted to having memory issues due to concussions, and they’re not willing to clear a guy who is more sharp than ever raises some questions, and adds legitimacy to the fan-created conspiracy theory.

With Daniel Bryan out, and it looking like he’s not going to be coming back any time soon, if ever, WWE is in dire-need of star power. On top of Bryan, they’re also missing Randy Orton, Seth Rollins, John Cena, and Cesaro, all of whom are dealing with serious injuries at the moment.

This is where new WWE signee AJ Styles comes in.
Styles, who appeared on Chris Jericho’s podcast on Friday, Talk is Jericho, said that when his TNA deal expired in 2014, he sent feelers WWE’s way, and they showed absolutely no interest in bringing him aboard, which is why he ended up signing with New Japan Pro Wrestling, and returning to Ring of Honor.

After a year in New Japan, Styles once again sent feelers WWE’s way, and this time they were interested, and they presented a deal that was much more lucrative than any other company could offer. Also, Styles said that WWE never even asked him to go through NXT before heading to the main-roster, which is customary these days, no matter how experienced or good you are.

On Jericho’s podcast, Styles explained his one and only meeting with WWE chairman Vince McMahon, which involved McMahon telling him what his character was going to be. Styles said that McMahon wanted him to be the undersized underdog, who’s had to fight for everything he’s got, and who is constantly fighting to overcome the odds, no matter how great they may be. Basically saying that he wants Styles to be a “little Pitbull,” and that the fans will get behind him if he’s able to work as that character.

The fans clearly got behind Styles before he even got to WWE, as they were anticipating his debut at the Royal Rumble pay-per-view, and they completely exploded when his name flashed on the titan-tron.

There have been some who are thinking that WWE brought AJ Styles in to be Daniel Bryan’s replacement as the “people’s champion,” and Styles certainly fits the role. Furthermore, McMahon’s idea for Styles’ character is almost a complete copy of Daniel Bryan’s character while he was active, minus the “YES!” chant.

On this past Monday’s RAW, Styles appeared on Miz TV, where The Miz berated both the fans, and “The Phenomenal One.” During his rant, which included calling Styles a “little rookie redneck,” Miz compared Styles to Bryan, and he asked the fans, in a mocking tone of course, if they really thought that Styles could become the next Daniel Bryan. Of course, all the people chanted “YES!”

Also, Miz’s purpose during the Miz TV segment was to get Styles to agree to let him be his mentor, saying that the only reason Daniel Bryan became the success that he did was because of his own guidance when he was Bryan’s “pro mentor” when NXT was a competition-based show back in 2010.

At the time, Miz being Bryan’s mentor was thought of as a complete joke because Bryan had been wrestling for far longer than Miz had. Also, Bryan was considered to be one of, if not the best in-ring performer in the world at the time, and Miz was certainly nowhere close to that level.
If WWE has no intention of bringing Daniel Bryan back ever again, it’s very likely that the former WWE Champ will end up leaving the company, and wrestling elsewhere. Somewhere like New Japan Pro Wrestling for example.
WWE doesn’t want to lose a star the caliber of Daniel Bryan, but at the same time, if his contract expires, and he only agrees to re-sign if they’ll allow him to wrestle, then he will go elsewhere. He has even admitted that he will wrestle somewhere else if WWE doesn’t allow him to get back into the ring.
AJ Styles is already one of WWE’s most popular wrestlers, as his t-shirt completely sold out just 24 hours after his Royal Rumble appearance. So if WWE’s goal is to make Styles the next Daniel Bryan, which seems to be their intent, then they’re certainly on the right track. However, they could begin to resent his popularity if his presence begins interfering with their main-event storylines.
CREDIT // SOURCE - Aaron Sass
Posted by Mix Masta B at Monday, February 08, 2016