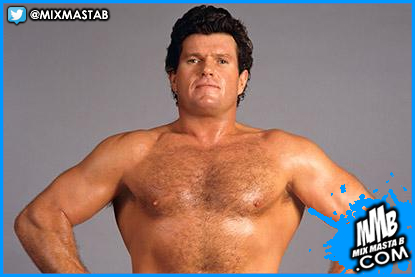 
Billed as "Canada's greatest athlete," Sharpe was a perrenial job guy in the 80's and 90's for WWF. He had his last televised match on June 6, 1995 losing in a tag team match to The Smoking Guns. After retiring from the ring, Sharpe made his living as a professional wrestling trainer, at his own school, Mike Sharpe's School of Pro-Wrestling.
PW Insider first reported the death of Sharpe, a second generation wrestler, whose father and uncle were one of the greatest tag teams in pro wrestling history in the 50s, and are best known for legendary matches in Japan with Rikidozan & Masahiko Kimura.
Sharpe was raised in a wrestling family. His father and uncle tagged together in the 1950's. At age 25, Mike decided to follow his father's footsteps and was trained by Dewey Robertson, and began working for Gene Kiniski's NWA All-Star Wrestling in the 70's.
Like his father, Sharpe Jr., took the ring name Iron Mike Sharpe. He started wrestling in 1976 in Canada, and worked smaller territories for several years, including runs in Stampede Wrestling.  At close to 6-foot-4 and 275 pounds, Sharpe was a big powerhouse who was known as a tough guy because of his amateur boxing background.  But he was missing the element that would make one a big star, when it came to the charisma.
He did decently well in territories like Mid South and Georgia in the early 80s, but was beat known for is run in the WWF from 1982 to 1989 as a lower card regular.
He started out getting a push, with Lou Albano as his manager, and having a loaded forearm brace, built for matches with champion Bob Backlund. But he never got a shot in Madison Square Garden (he did work with Backlund in some other cities) and his push ended, but he had a long tenure with the company as a reliable enhancement wrestler.  He was treated as a job guy with some credibility, nicknamed "Canada's Greatest Athlete," which was the nickname that Gene Kiniski used in the 50s, 60s and 70s.
Within wrestling Sharpe was known for being obsessively clean, and for always perfectly folding his clothes.  He would be constantly washing his hands while at shows and taking showers, and was known as Mr. Clean.  He was also compulsive when it came to training, and was known as a very well conditioned big man.
But in a cruel fate, with all that training, his health started to want over the past decade.  For years he was largely confined to a wheelchair and had lost one of his legs, and had been suffering from constant health problems.
Posted by Mix Masta B at Monday, January 18, 2016