David Bowie, a master of music and makeovers, dies at 69 #MMBMusic 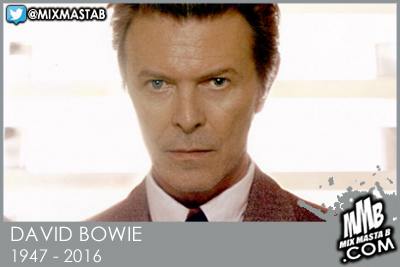 David Bowie, whose incomparable sound and chameleon-like ability to reinvent himself made him a pop music fixture for more than four decades, has died. He was 69.
Bowie died Sunday after an 18-month battle with cancer, his publicist Steve Martin told CNN.


"David Bowie died peacefully today surrounded by his family after a courageous 18 month battle with cancer," said a statement posted on his official social media accounts. "While many of you will share in this loss, we ask that you respect the family's privacy during their time of grief."
Neither his publicist nor the statement elaborated on what type of cancer the singer had.
Bowie's death has been the regular subject of Internet hoaxes for the last several years. So the news came as a shock to fans and industry insiders when it was confirmed.
"Very sorry and sad to say it's true. I'll be offline for a while. Love to all," his son, "Moon" film director Duncan Jones, tweeted.

Duncan Jones' mother, Bowie's first wife, Angela, was sequestered on the UK "Celebrity Big Brother." Producers posted Monday that she had been informed of his death off camera and had chosen to stay on the show.
Bowie's wife of 24 years, fashion model Iman, had not released a statement as of Monday morning. On Friday she retweeted several birthday wishes to her husband.
British Prime Minister David Cameron expressed his sorrow to the press.
"Genius is an overused word but I think musically, creatively, artistically, David Bowie was a genius," he said. "He was a master of reinvention, and one of the things that's so incredible is almost all his reinventions were incredible successes and worked brilliantly. And so we mourn the loss of a great talent."
From a mop-topped unknown named David Jones, to his space-alien alter ego "Ziggy Stardust," to his dapper departure as the soul-influenced Thin White Duke, Bowie married music and fashion in a way few artists have been able to master.
He was theatrical, he was flamboyant, he was without parallel in his showmanship.
His albums, especially after his 1972 breakthrough "The Rise and Fall of Ziggy Stardust and the Spiders from Mars," were treated as events. His songs, including "Changes," "Fame," "Heroes" and "Modern Love," were anthemic hits, played constantly on the radio and inspiring generations of musicians.
With a voice that soared from a baritone to a falsetto, he spoke of carrying on against the odds. Of the terror in knowing what the world is about. Of turning and facing the strange.
His songs were a salve for the alienated and the misfits of the world.
Bowie had just released his latest album, "Blackstar," on Friday, his 69th birthday. It shot to No. 1 on the iTunes chart in the UK and No. 2 in the United States, underscoring his appeal even after decades in the music business.
Like his past releases, the work -- generally praised by music critics -- defied genres. The influential music publication NME called it an amalgamation of "warped showtunes, skronking industrial rock, soulful balladeering, airy folk-pop, even hip-hop."